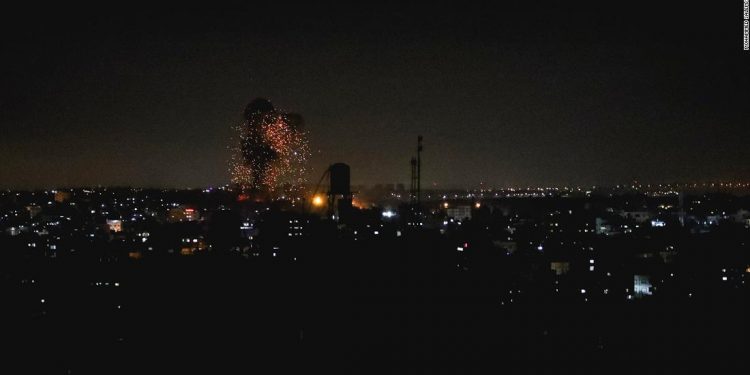 The Israeli military struck targets in Gaza for the second time this week, the Israel Defense Forces (IDF) said in a statement, after a continued barrage of incendiary balloons sparked eight fires in southern Israel.

Overnight Wednesday, the IDF struck what it said were Hamas military complexes and meeting places for the Khan Younis and Gaza brigades of the militant organization which rules Gaza.

Those airstrikes, the first since the ceasefire went into effect last month, were in response to incendiary balloons which sparked 20 fires across in fields across southern Israel.

Less than 48 hours later, as the launching of balloons from Gaza continued, the IDF carried out another series of airstrikes late Thursday night. The IDF said they targeted military compounds and a launch site belonging to Hamas.

In a sign that both Israel and Hamas were interested in preventing a full-blown escalation, Hamas did not respond to Wednesday’s airstrikes with rocket launches.

However, the situation along the Israel-Gaza border remains fragile, and a miscalculation by either side could ignite an immediate and serious escalation in an environment that has not returned to a state of calm after last month’s fighting.

Earlier Thursday evening, the IDF Chief of Staff conducted a situation assessment, including the possibility of a resumption of fighting between Israel and Hamas.

Incendiary balloons are relatively simple contraptions — helium balloons that often look like children’s birthday party decorations, attached to explosives or devices that are pre-emptively lit on fire. Militants launch the balloons from Gaza and winds from the Mediterranean Sea help propel them into Israeli territory.

While militants have been sending balloons into Israel for years, the Israeli military’s response of airstrikes in Gaza is a new escalation. Israeli officials said it was part of a message to Hamas that any provocation will be met with force.

Former finance minister Israel Katz, who was in the cabinet during the most recent conflict with Gaza last month, said that after that operation, “we decided to change the rules.”

“For every attack in Israel, targeted assassinations and widespread attacks on Hamas targets will be carried out,” he tweeted.