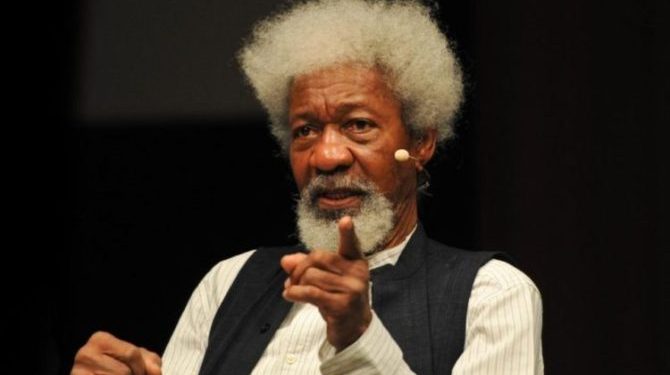 The Nigerian government kidnapped Nnamdi Kanu from a foreign country in order to bring him to trial in Nigeria, Nobel Laureate Wole Soyinka has said.

Soyinka, who condemned the Nigerian government’s action, however, criticised Mr Kanu’s ‘hate rhetoric’ while he was hiding outside the country.

“For me, was it right to have kidnapped [him]? You can say intercepted as much as you want but for me Kanu was kidnapped and that is wrong internationally and it is wrong morally,” he told the BBC in an interview.

The Nobel Laureate said there could be a nationwide furore when the truth about the circumstances surrounding the arrest of Mr Kanu becomes public.

“It is not for me to tell the Nigerian government to prepare itself because there is going to be a huge squawk when the truth about how Kanu was arrested (becomes public),” he said.

There have been many speculations on where Mr Kanu was arrested as the federal government has failed to provide this information. Ifeanyi Ejiofor, a counsel to the secessionist, had said his client was arrested in Kenya.

However, the Kenyan government through its High Commissioner to Nigeria, Wilfred Machage, said: “Kenya was not involved in the alleged arrest and extradition to Nigeria of Mr Kanu.

“To us, therefore, these allegations are fictional, imaginary and deliberately concerted to fuel antagonistic feelings among certain sections of the Nigerian people.”

When asked what advice he would give the government on how to handle Mr Kanu’s case, Mr Soyinka said, “We have to ask ourselves, what is the position politically, economically, mentally, spiritually? What is the collective state of mind of a vast section of this nation at the moment? And that state of mind is best described as distrust, total distrust.”

“This government has earned itself distrust – rightly or wrongly, that is for it to decide – anybody who is telling this government that the people of this nation still believes it and the government believes that, it is plunging this country further into the abyss.”

Mr Soyinka also condemned Mr Kanu’s conduct outside the country and described the hate rhetoric he propagates as ‘most unfortunate’ adding that, “hate rhetoric can only be judged by the laws of any nation.”

Recall that the National Broadcasting Commission (NBC) had earlier in the year said it jammed the signals of Mr Kanu’s Radio Biafra in most parts of Lagos.

According to the Deputy Director, Public Affairs of NBC, Ekanem Antia, who described the station as illegal, its broadcast contained incendiary messages and was notorious for spewing fake, inflammatory and inciting content.

Mr Malami, however, did not state specifically where the arrest took place; ditto for the Minister of Information and Culture, Lai Mohammed.

“There have been speculations on how this re-arrest was pulled off and in which country the hitherto fugitive leader of the proscribed IPOB was nabbed. What we can tell you, once again, is that the re-arrest was made possible by the diligent efforts of our security and intelligence agencies, in collaboration with countries with which we have obligations. We continue to respect and honour the obligations,” Mr Mohammed said.

Assuring concerned parties that Mr Kanu will get a fair trial, the minister said, “I can assure you that the fair deal that Kanu denied many of the victims of the violence which he willfully instigated through his broadcasts and tweets will not be denied him.”

Mr Kanu, who was then better known as the Director of Radio Biafra, was first arrested in 2015 over his separatist agitations for the independent Republic of Biafra, which he said will include the Igbo-dominated states in the South-east region and some other neighbouring states.

He was then the leader of the little known Indigenous People of Biafra (IPOB) which started as a peaceful separatist group.

Following their arrest, Mr Kanu and his co-defendants were charged with offences of treasonable felony, unlawful possession of arms, and illegal importation of broadcast equipment, at the Federal High Court in Abuja.

The defendants including Mr Kanu denied the charges.

They were not granted bail until April 2017.

In September 2017, soldiers invaded Mr Kanu’s home, in Afara-Ukwu, near Umuahia, Abia State. During the incident, Mr Kanu escaped from the country.

The Nigerian government also obtained a court order on September 20, 2017, proscribing and designating IPOB as a terrorist group.

Mr Kanu was no longer seen in public after the military attack on his home until months later when his pictures showed him to be in Israel.

News also had it at the time that the IPOB leader, who is known to be a dual Nigerian and British citizen, was making moves to return to the United Kingdom.

Mr Kanu eventually returned to the UK where the government refused to proscribe IPOB or declare it a terror group.

Since escaping from Nigeria, Mr Kanu has been using the social media space to keep in touch with his followers.

Known for making incendiary statements against Nigeria through his posts and broadcasts on social media channels, Mr Kanu is known to have called for attacks on state facilities and personnel and citizens in the South-east region.

The Eastern Security Network (ESN), which he formed as a military wing of IPOB, has been accused by the Nigerian government of being responsible for many deadly attacks in the region. Many of the ESN members have also been arrested and killed.

IPOB initially started as an unarmed and peaceful group. Its members, however, became targets of violent attacks of state forces with many of them extrajudicially killed between 2015 and 2016.

While Mr Kanu was abroad, the Federal High Court in Abuja, in March 2019, revoked the bail earlier granted him in April 2017.

The judge ordered his arrest and the separation of his trial from that of his co-defendants.