Survivor Recounts How He Escaped OPIC Plaza Explosion in Lagos 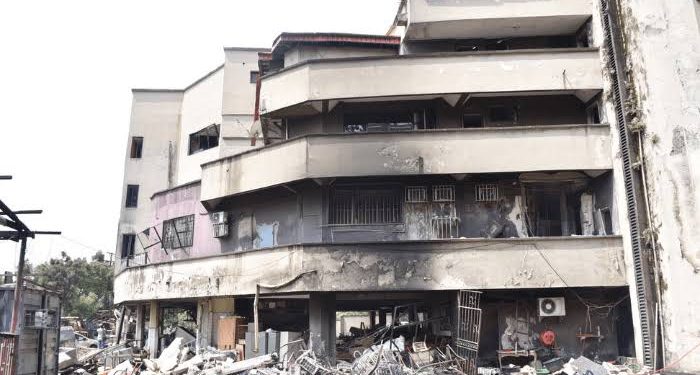 One of the survivors of a gas explosion on the Mobolaji Bank Anthony Way, in the Maryland area of Lagos State, has narrated how he narrowly escaped being burnt to death on Thursday night.

The survivor, who identified himself as Peter, said that he was seated in a car on the premises of OPIC Plaza when he felt an unusual coldness of his feet.

Peter, who claimed to be resting in the vehicle after the day’s work at the plaza, said he came out of the car around 11pm on Thursday to observe the situation.

On coming out of the car, Peter said he saw a gas-laden truck stationed in front of OPIC Plaza and he was paralysed with fear.

“Before I could come out of the plaza and cross to the other side of the road, the gas had already filled the whole area. It was so suffocating that it was very difficult for me to navigate my way out of the gaseous environment.

Meanwhile, the National Emergency Management Agency said three bodies were recovered from the scene of the explosion on Mobolaji Bank Anthony Way, around Maryland.

Also, the Director-General and Chief Executive Officer of the Lagos State Emergency Management Agency, Olufemi Damilola Oke-Osanyintolu, in a statement, said 13 people were injured while 22 vehicles were burnt in the ensuing inferno.

It read, “The Agency responded to a distress call shortly before midnight Thursday concerning an exploding gas tanker which was moving inward Ikeja at the above location.

“The resultant explosion affected the OPIC Plaza leading to an inferno which damaged 22 parked vehicles within the premises.

“First responders worked to control the spread to the adjacent properties as well as the nearby petrol station until 04:00hrs Friday.

“Thirteen people were rescued, nine males, four females, they sustained various degree of burns and were provided with pre-hospital care before taking to Lagos State health facilities for further treatment.

“The affected truck has been moved, the entire affected area cordoned off and post-disaster assessment ongoing.”