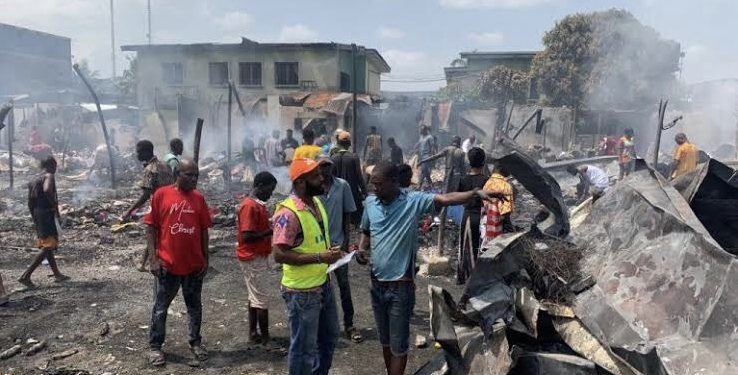 No fewer than 1,200 artisans have been rendered jobless in Yaba, Lagos, following the inferno which ravaged the tailoring section of the popular Tejuosho Market.

The artisans, who specialise in fabric works, were rendered jobless as over 1,600 industrial, weaving and straight sewing machines were destroyed in the mid-afternoon fire outbreak on Tuesday.

Lagos State Territorial Coordinator, National Emergency Management Agency, NEMA, Ibrahim Farinloye, in his post-disaster loss and needs assessment at the scene of the incident, confirmed this on Wednesday.

The fire, which emanated from an industrial generating set, was said to have affected 150 lock-up shops.

Farinloye, who represented NEMA Director General, Alhaji Mustapha, consoled the artisans urging them not to see the situation as a temporary setback, but as trial that would bring greater success.

The Chairman of the traders, Godwill Okorie, said the way the fire spread to the whole market within minutes had left him in doubt on the cause of the inferno.

He appealed to loan facilitators to kindly consider the calamities and grant them more loans to enable them start off and service the loans.

According to NEMA, “the assessment revealed that about 150 lock-up shops with at least registered eight traders were occupying each shop.”