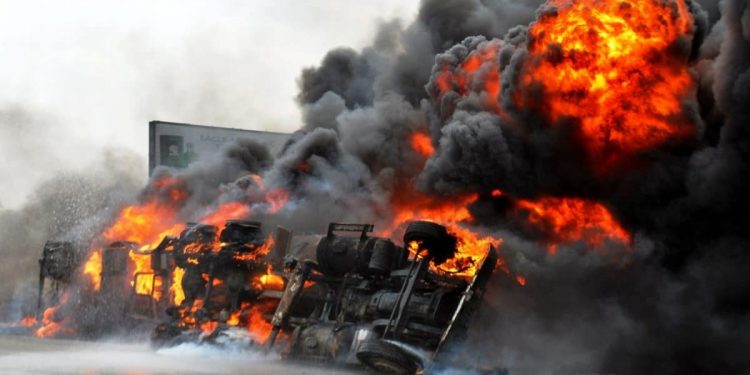 Two persons have been confirmed dead after a diesel-laden tanker crashed and exploded at Kara Bridge along the Lagos-Ibadan Expressway, Ogun State.

It was learnt that the driver of the truck, with number plate DTM 109 XA, lost control while moving inward Ogun State.

He was said to have crashed the truck against the railings, as the vehicle overturned while its head was detached and fell into a ditch below the bridge.

The head was said to have exploded, killing two of the three occupants.

According to PUNCH, the truck spilled its content on the expressway, as firefighters were on standby to avert any form of disaster resulting from the spilled content.

The incident resulted in gridlock along the axis, extending to the Berger area.

The police and men of the Ogun State Federal Road Safety Corps were also seen at the scene of the incident, as they controlled the traffic.

The Ogun State Commandant of the FRSC, Ahmed Umar, said it was a lone crash caused by speed violation and loss of control.

He said, “Obviously, the driver must have been on speed. It had three occupants, one survived and two others were trapped and burnt to death. Men of the fire service were able to put out the fire, but the detached head was too hot to ascertain the extent of damage.”

The Ogun State Police Public Relations Officer, Abimbola Oyeyemi, said he was not aware of the incident.