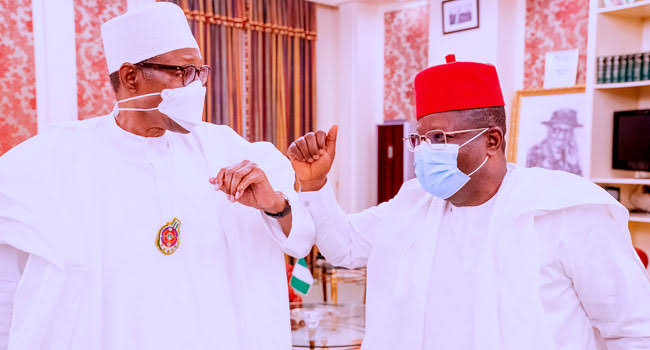 The Ebonyi State Governor, David Umahi, has declared his intention to contest for president in 2023 on the platform of the All Progressives Congress (APC).

He made his intention public shortly after a meeting with President Muhammadu Buhari on Tuesday at the State House in Abuja.

This is coming a day after a former governor of Lagos State, Bola Tinubu, revealed his plan to run for the office on the ticket of the APC.

Mr Tinubu said, after meeting with Mr Buhari on Monday, that he would contest for the office of president.

Mr Umahi, in an interview with State House correspondents, said he has told the president about his ambition to contest for the seat if the party zones the ticket to the Southern region.

“We discussed politics as the growth of our party, APC, in Nigeria, and the South East. And, of course, you know, the interest of the South East, for the seat of presidency in 2023.

“And, of course, I told Mr President, that without prejudice to whatever will be the decision of the party, which we shall abide by, that if the party throws the ticket open or zones to Southern part of Nigeria that I believe that with what I have put in place in the past six years plus, that I will be running for presidency on the platform of the APC.

“So, I told him and of course, he believes that whoever wants to run for president of this country must have to consult widely, go to all the leaders and that we must do everything to remove ethnicity and religion in our politics so that this country can grow,” he said.

Like the APC national leader, Mr Umahi promised to replicate his feats as a governor at the national level if he eventually gets to fly the party ticket and win the presidential election.

The governor, who will round off his second term in office in 2023, was one of the three Peoples Democratic Party (PDP) governors that dumped the party for the ruling party between late November 2020 and June 2021.

The Ebonyi governor had argued that his defection had nothing to do with the 2023 presidential ticket but to take the Southeast region to the centre.

“I want to clear the air that I never sought (for) PDP presidential ticket and I will not. So whoever said that I moved to APC because they refused to zone the ticket to me is being very mischievous,” the governor had explained at the time.

However, with Mr Umahi’s declaration, he may be jostling for the APC presidential ticket with Mr Tinubu and the Kogi State Governor, Yahaya Bello, who had declared his intention to contest the presidential election on the APC platform.

The Vice President, Yemi Osinbajo, also of the APC, may be a contender but he has not officially declared his intention to run.

The Ebonyi governor joins some of the South-east politicians who have indicated interest in occupying the nation’s highest political office.

Last year, a former Senate President, Paul Anyim, a member of the Peoples Democratic Party (PDP), announced his plan to run for president whether his party zones the slot to the South-east or not.

Earlier, Kingsley Moghalu from Anambra State and Sam Ohuabunwa from Abia State had earlier indicated their interest in the race.