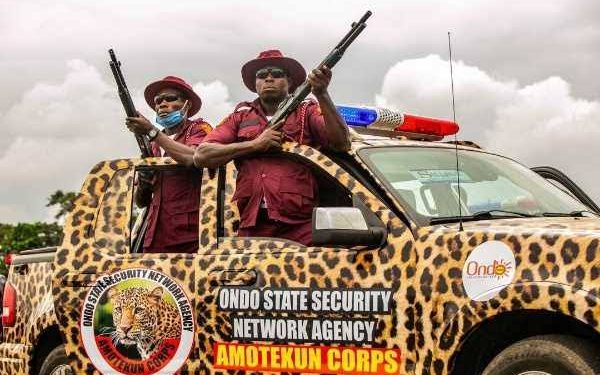 Men of the Ondo State Command of the South-West Security Network, code-named, “Amotekun” have rescued nine (9) of the twelve (12) abducted Lagos-bound travellers by suspected gunmen in the state.

The state Commander of Amotekun, Mr Adetunji Adeleye, told newsmen in Akure on Thursday that the victims were rescued after his men responded to a distress call from concerned citizens.

The passengers, who were travelling from Abuja to Lagos in an 18-seater bus, were attacked and abducted by the armed men at Idoani-Ifira axis.

The incident happened on Wednesday at a bad portion on Idoani-Ifira Road in Akoko South-East Local Government Area of the state.

It was gathered that there were sporadic shootings by the gunmen while carrying out their activities and later escaped into the forest with the bus passengers.

Adeleye said that his men were still combing the bush to rescue the remaining three victims.

“Our men responded to the gunshots and a distress call. They got there on time and were able to rescue nine of them.

“They took them to our office in Isua and released them after giving them the necessary attention.

“The vehicle and its driver have also been released to the police. We are now on the trail of the kidnappers to rescue the remaining three victims,” Adeleye said.

The Divisional Police Officer in Isua-Akoko, Mr Hakeem Sadiq, confirmed the incident to newsmen in Akure on Thursday.

Sadiq said that the anti-kidnapping unit was already working with other sister agencies to ensure that the travellers were rescued unhurt.