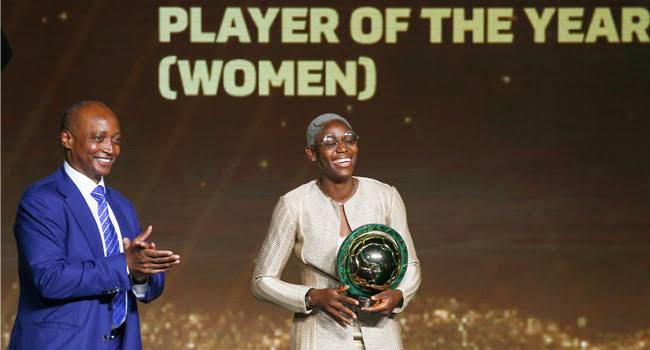 Oshoala was the only Nigerian nominee at the 2022 CAF awards after Falcons’ coach Randy Waldrum, who was originally nominated for Coach of The Year, was dropped from the final shortlist list along with Monday Gift, and Super Eagles duo Moses Simon and Akinkunmi Amoo.

Oshoala had equaled countrywoman Perpetua Nkwocha’s fourth CAF Women’s Player of the Year Award at the 2019 Awards Gala, but today she became the sole record holder for the most award wins, thus stamping her authority on the continent.

Despite being injury-laden for a large part of last season (three months), Oshoala finished top scorer in the Liga Iberdrola with 20 goals in 19 appearances to become the first African to win the Pichichi award in Spain.

Her Barcelona team also achieved the incredible feat of winning all 30 league games in their domestic division with Oshoala’s Golden Boot-winning goals contributing largely to the feat.

Although Barcelona Femeni fell to defeat in the Champions League final, Oshoala scored in the 4-0 win against Real Madrid to qualify for the final of the Spanish Cup, which they won to complete the domestic treble after winning the Supercopa.

Oshoala bowed out early from the WAFCON in Morocco after suffering an ankle injury in the opening day 2-1 defeat to Banyana.