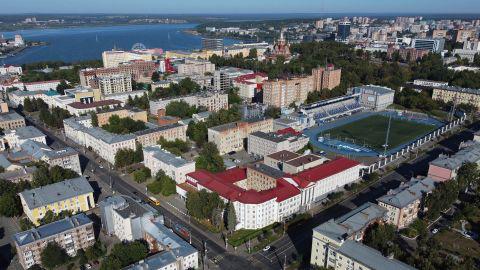 At least five children have been killed in a school shooting in the western Russian city of Izhevsk, Russian state media reported Monday.

Nine fatalities have been reported so far, according to Russian state news agency TASS. Among those killed was the school’s security guard, according to Alexander Brechalovn, the head of the regional government.

It is unclear if the attacker is alive. Brechalovn said the assailant shot himself but did not say if he survived.

The shooting took place at School 88 in Izhevsk, the capital of Russian region of Udmurtia. It has since been evacuated, Brechalovn said.
Izhevsk is home to more than 600,000 people, making it one of Russia’s 20 most populous cities. It was founded as a steelworks settlement in 1760 and remains a prominent industrial center.
The city is perhaps best known as the home of the AK-47 rifle and the longtime residence of the Soviet lieutenant general credited with its development, Mikhail Kalashnikov.

Pyotr Ilyich Tchaikovsky, the composer of Swan Lake and The Nutcracker ballets, was born in the Udmurtia region.

This is a developing story. More details to come.