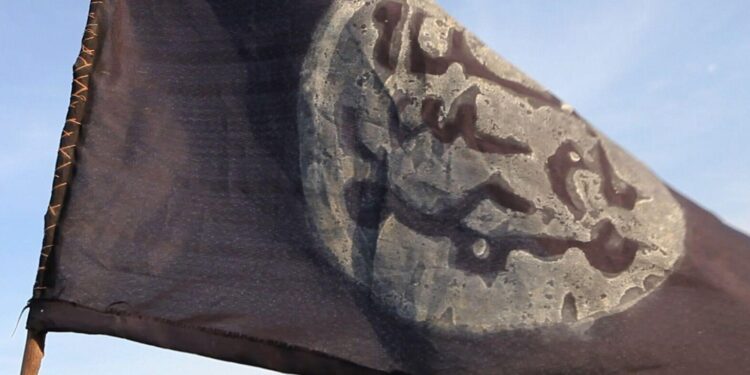 A Boko Haram flag flutters from an abandoned command post in Gamboru deserted after Chadian troops chased them from the border town on February 4, 2015.

Boko Haram fighters have reportedly hoisted the Islamist group’s flag in a remote district in Niger State, Nigeria’s Middle Belt region, and seized the wives of fleeing residents, the state’s governor has said.

“I am confirming that we have Boko Haram elements in Niger State, around Kaure. They have taken over the territory… They have installed their flag,” said Niger State Governor Abubakar Bello, in a widely circulated video on Monday.

Bello disclosed during a visit to an Internally Displaced Persons Camp in the state capital Minna, that over 3000 persons have been ousted from their communities by Boko Haram and other criminal gangs locally known as bandits.

“Their towns have been taken over by bandits and Boko Haram elements… Their wives have been seized from them and forcefully attached to Boko Haram members,” the governor said.

“The Boko Haram elements are trying to use this area as their home, just as they did in Sambisa. Sambisa is hundreds of kilometers away from Abuja. But Kaure is less than two hours drive to Abuja. So nobody is safe anymore… Not even Abuja is safe,” Governor Bello warned.

Abuja had been previously hit by terror attacks. In 2011, multiple explosions rocked the city, killing dozens. Also hit was a United Nations building, during which at least 18 people died.

Sambisa, a vast forest reserve in Borno State, northeast Nigeria, has served as a hideout and stronghold of Boko Haram operatives, whose deadly activities have caused the death of more than 37,000 people and displaced over two million since 2011, according to data by the Council on Foreign Relations.

Bello’s comment comes days after the jihadist sect was reported in local media to have erected its flag in Geidam, an insurgency-troubled community in Yobe State.

A Nigerian Army spokesman told CNN on Tuesday that Boko Haram terrorists have been dislodged from Geidam.

“There is no Boko Haram in Geidam. They were there…we had a running battle with them and they are no more there. They did not hoist their flag at any point,” said Brigadier General Mohammed Yerima.

Yerima told CNN he was unaware of Boko Haram’s incursion into Niger State.

“I’m just hearing this from you,” he said, adding that “it has not been reported to us.”

Yerima, however, stated that no Nigerian territory is being controlled by terrorists.

A spokesman for the police in Niger, Wasiu Abiodun, told CNN that the force could not dispute Governor Bello’s claim about the influx of Boko Haram fighters into the state.