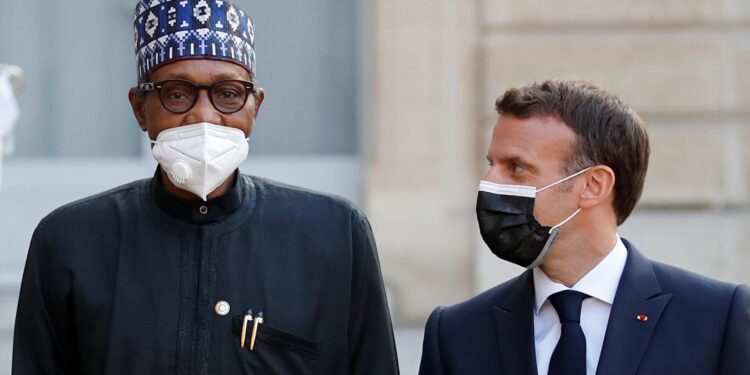 The presidential aircraft, conveying the president and some of his aides, landed at the Presidential Wing of Nnamdi Azikiwe International Airport, Abuja at about 3.52 p.m.

While in Paris, the Nigerian leader participated fully in the Financing Africa Summit, held at Grande Palais Ephemere on Tuesday, with the theme: “External Financing and debt Treatment.”

The president also engaged in various bilateral meetings on the sidelines of the summit.

At the opening of the summit on Tuesday, Mr. Buhari called on European countries and global financial institutions to consider reducing the devastating effects of COVID-19 pandemic on African economies by restructuring debt portfolios and providing complete debt relief.

He observed that many African countries were already experiencing debt distress and the debt service suspension by France and the G-20 was not far-reaching enough.

He also called for the release of vaccines to Africa which, he said, had been left behind in the protection of the majority of its citizens.

On May 19, Mr. Buhari and his French counterpart, Emmanuel Macron, engaged in bilateral talks, where they both agreed to cooperate in fighting insecurity

The two leaders expressed the countries’ commitment to working together to fight insecurity bedevilling the Lake Chad basin area and the entire Sahel.

Macron, who hosted the Nigerian leader on the margins of the Financing Africa Summit in Paris, pledged his unflinching support for Nigeria and its people regarding the security challenges currently facing the country.

He also met with some investors, including the Chairman/CEO of Total, Patrick Pouyanne, Executive Vice President, AirBus, Silvere Delaunay and Chairman of the Board of a software company, Daussault Systems, Florence Verzelen.

Others were Chairman/CEO of General Engineering and Marketing of Telecommunications Operator, Francois-Regis Teze and Chairman/CEO, Donaflex Automotive, Donatus Nwokoye, a very successful manufacturer.

The Nigerian leader urged the investors to further explore the vast opportunities of human and natural resources in Nigeria.

Buhari’s last official engagement in Paris was the interactive session with some Nigerians in France, where he assured them of his administration’s commitment to free and fair elections in the country.

According to him, the bedrock of democracy remains sustenance of the multi-party structure, with trust from citizens.

He noted that results from elections since he assumed office had been a mixed bag, with the people’s choice playing out, promising to keep the template that had brought more credibility to the country’s electoral process.