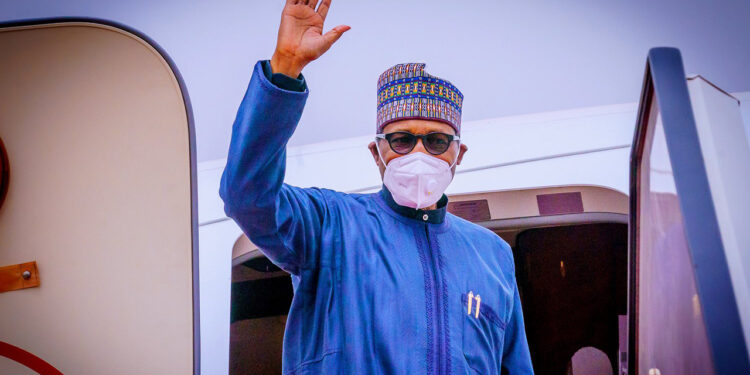 President Muhammadu Buhari has returned to Abuja after weeks in London for medical consultation.

The presidential aircraft conveying Mr. Buhari and some of his aides landed at the Presidential Wing of the Nnamdi Azikiwe International Airport Abuja at about 4.45 p.m.

Those at the airport to welcome the president included the Chief of Staff to the President, Ibrahim Gambari, the Minister of the Federal Capital Territory (FCT), Muhammed Bello, and the National Security Adviser to the President, Babagana Monguno.

President, Buhari, after a brief welcoming ceremony at the airport, boarded a presidential helicopter that conveyed him to the Presidential Villa.

The president has been criticised by many Nigerians for travelling for medical treatment at a time resident doctors in the country were preparing for a nationwide strike. The doctors commenced the strike two days after the president’s trip. They have since suspended the strike.

While Buhari was airborne on March 30, the Peoples’ Democratic Party (PDP) lashed at him, saying his medical trip abroad was a direct indictment of his presidency over its failure to fix the country’s healthcare system.

In a statement by its spokesperson, Kola Ologbondiyan, the PDP said it was worrisome that under Mr. Buhari, even the highly-rated State House Clinic had become moribund that it could not provide medical check-up for the president.

On March 3, a group led by a former presidential aide, Reno Omokri, organised a protest in London, an action they said was conceived to harass Mr. Buhari out of the United Kingdom.