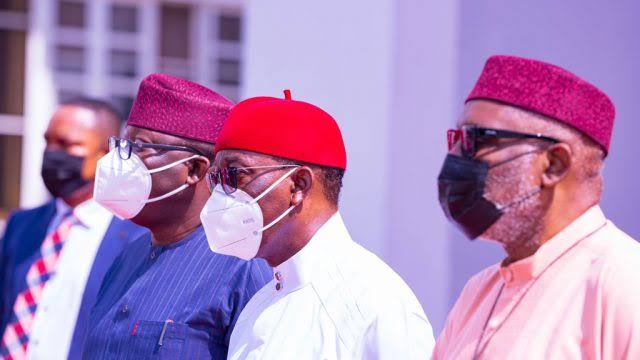 Chairman of the Southwest Governors’ Forum and Ondo State Governor, Oluwarotimi Akeredolu, yesterday, criticised the Senior Special Assistant, Media and Publicity to the President, Garba Shehu, on the presidency’s stance on the ban on open grazing in the Southern part of Nigeria.

The Presidency had on Monday faulted the recent resolutions of the Southern Governors, including the ban on open grazing in the entire southern part of the country, adding that the governors’ resolutions failed to provide any solution to the lingering crisis between farmers and herders in the country.

Akeredolu insisted that Shehu, who derided the resolutions of 17 Southern governors’ meeting in Asaba two weeks ago, had no right to speak for President Muhammadu Buhari and the Presidency on the farmers/herders’ clashes.

The Senior Special Assistant to the Governor on Special Duties and Strategy, Dr. Doyin Odebowale, in a statement issued to journalists in Akure yesterday, chided the Presidency’s response titled ‘Deep rooted solutions to the herdsmen attacks.’

Odebowale lamented that the President’s aide and his utterances, alongside other persons in the Presidency, were “self-deluding, mendacious but potentially a dangerous itinerary to anarchy.

“He works, assiduously, for extraneous interests whose game plan stands at variance with the expectations of genuine lovers of peaceful coexistence among all people, whose ethnic extractions are indigenous to Nigeria.

“Garba must disclose, this day, the real motive(s) of those he serves, definitely not the President. He cannot continue to hide under some opaque, omnibus and dubious directives to create confusion in the polity. The easy recourse to mendacious uppity in pushing a barely disguised pernicious agendum is well understood,” he said.

Describing his response to Shehu as “On the trail of an agent provocateur,” Adebowale pointed expressly that some elements in the Presidency were making moves to grab the southerners’ land for their kinsmen from the north.

According to him, “The declaration that the recommendations of the Minister of Agriculture, Alhaji Sabo Nanono, a mere political appointee like Garba Shehu, are now the “lasting solutions” which eluded all the elected representatives of the people of the Southern part of the country, exposes this man as a pitiable messenger who does not seem to understand the limits of his relevance and charge.

“Garba contends that ‘their announcement is of questionable legality,’ referring to the 17 governors of the southern states, but the decision of certain elements to take the ancestral lands of other people to settle their kinsmen, including the ‘gun-wielding killer herdsmen’ and their families is not questionable legality.”

The governor’s aide noted that there was no contention to the rights and freedom of anyone across the federation, but reminded the Presidential spokesman that there was dire need to embrace modernisation.

Odebowale iterated that the southern governors were duly elected to direct the affairs of the people, saying: “May we warn Garba and his cohorts to desist from hurling insults at the elected representatives of the people. He lacks the authority to make policy statements for the Federal Government, unless directed, expressly. His acts are clearly those of an agent provocateur. Other closet dreamers, aspirers to colonial fantasies, must be weaned off their delusion.

“No inch of the space delineated and known, currently, as Southwest, and indeed the whole South, will be ceded to a band of invaders masquerading as herdsmen under any guise.”

Also, the Coalition of Northern Groups CNG has asked the Federal Government to take immediate steps to evacuate all herdsmen currently in the South back home. In a statement by CNG’s spokesperson, Abdul-Azeez Suleiman, the group said a study has shown that at present, only 10 per cent of Fulani herdsmen live and conduct business in the entire South.

CNG also told Northern governors to commence preparation to receive the returning Fulani communities and their livestock assets by identifying suitable grazing lands for them and making sufficient allowance for farmers at the same time.

Northern Elders Forum (NEF) said the growing call for secession in the Southern part of the country was because governors in the region have decided to surrender their mandates to secessionist tendencies and movements.

The Forum through its spokesperson, Hakeem Baba-Ahmed, also accused the governors of building ethnic monsters and hiding behind them to whip up sentiments in a crude attempt to extract concessions no one is in a position to give or guarantee.