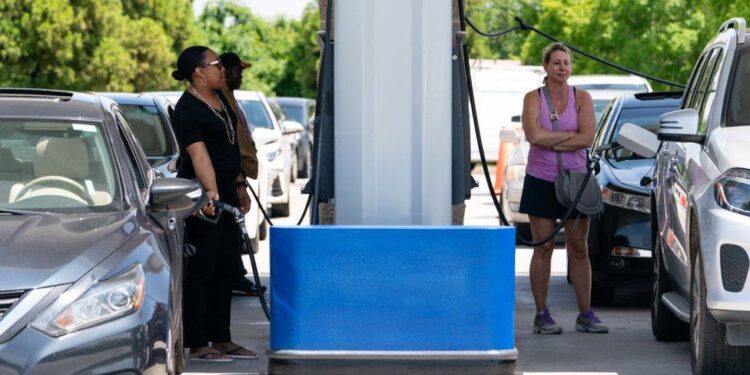 Fears over fuel shortages spurred some customers to panic buy petrol in the United States.

The operator of the biggest fuel pipeline in the US announced it would resume operations on Wednesday evening after a five-day closure.

A ransomware cyber-attack forced Colonial Pipeline to shut down the main part of its network on Friday.

The closure saw supplies tighten across the US, with prices rising and a number of states declaring an emergency.

Colonial Pipeline warned in a press release that it could take several days for the delivery supply chain to return to normal.

“Some markets served by Colonial Pipeline may experience, or continue to experience, intermittent service interruptions during the start-up period,” they added in a statement.

The FBI has accused a criminal gang called DarkSide of being behind the ransomware attack.

Colonial has said it will not pay the ransom demanded by the hackers.

US petrol prices rose on Wednesday as motorists queued to fill up their cars on the sixth day of the Colonial Pipeline shutdown.

The average price per gallon hit $3.008 (£2.14) – the highest level seen since October 2014, according to the Automobile Association of America.

A spokeswoman said that the shutdown and “fluctuating demand” had led to higher prices.

The pipeline operator said on Wednesday that it had restarted operations, but it warned that it would “take several days for the product delivery supply chain to return to normal”.

Governors in the states of Florida, Virginia, North Carolina and Georgia have all declared states of emergency, which mean they can introduce temporary rules to ease prices in their areas as a result.

How did hackers shut down the Colonial pipeline?

For many people, the image of the oil industry is one of pipes, pumps and greasy black liquid.

In truth, the type of modern operation Colonial Pipeline runs is extremely digital.

Pressure sensors, thermostats, valves and pumps are used to monitor and control the flow of diesel, petrol and jet fuel across hundreds of miles of piping.

All this operational technology is connected to a central system – and where there is connectivity, there is a risk of cyber-attack.

According to data collated by tracking firm GasBuddy, at least 3,500 petrol stations had run dry across Virginia, North Carolina and and several other states on Wednesday.

Energy Secretary Jennifer Granholm said earlier in the week that the firm Colonial could make a decision on restarting operations on Wednesday. She did caution, however, that the full pipeline might not be active for days after that.

Despite the government’s appeal to consumers not to panic-buy, many motorists have been seen queuing to fill up their cars.

#GasShortage2021 was also trending on social media, with some joking that they were reminded of the run on toilet paper seen at the beginning of the coronavirus crisis.

Others posted photos which appeared to show customers filling up plastic bags with petrol.

US Transport Secretary Pete Buttigieg said on Tuesday that the Biden administration was “working around the clock” to help deal with any shortages.

“This is a time to be sensible and to be safe, of course we understand the concern in areas where people are encountering temporary supply disruptions,” he said.

“But hoarding does not make things better, and under no circumstances should gasoline ever be put into anything but a vehicle directly or an approved container, and that of course remains true no matter what else is going on.”

The White House also said officials were considering new ways to alleviate any shortages, such as extending working hours for those transporting fuel.

Council Congratulate New APC Officers, Urges Them To Be Magnanimous In Victory