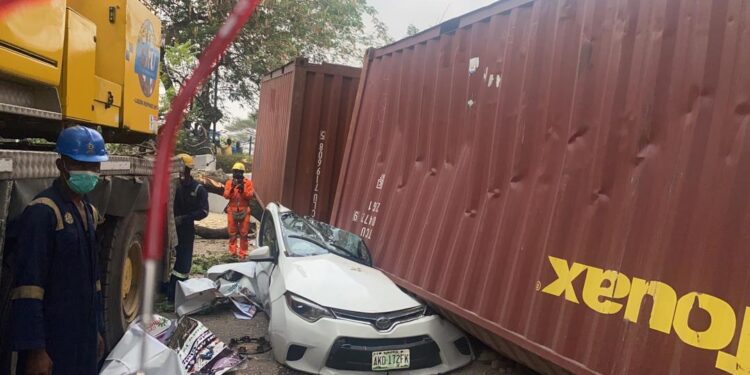 An unlatched container being conveyed by a truck has crushed a Toyota Corolla car parked within the premises of Greensprings Schools, Anthony, Lagos.

The accident, which occurred in the afternoon on Wednesday, led to the destruction of the car.

The Lagos State Emergency Management Agency (LASEMA) and other emergency responders are at the scene of the incident, an official said.

Speaking about the incident, Femi Oke-Osanyintolu, the Director-General of LASEMA said the truck “fell over while descending the Anthony Oke loop”.

One of the cars parked inside the premises of Greensprings Schools was crushed in the accident, he said.

“Fortunately, the car was unoccupied so there are no casualties,” Mr. Oke-Osanyintolu said.

The LASEMA boss said the agency has activated its response plan and “operation is ongoing within the school premises”.

There have been several incidents of fallen containers in Lagos, some of which have claimed lives of residents.

In another development, a tanker loaded with 33,000 litres of petrol fell in the early hours of Wednesday on the Apapa Iganmu Bridge.

Mr. Oke-Osanyintolu said the agency is “trans-loading the petrol into an empty tanker, while oncoming vehicles have been diverted to forestall the occurrence of a secondary incident”.