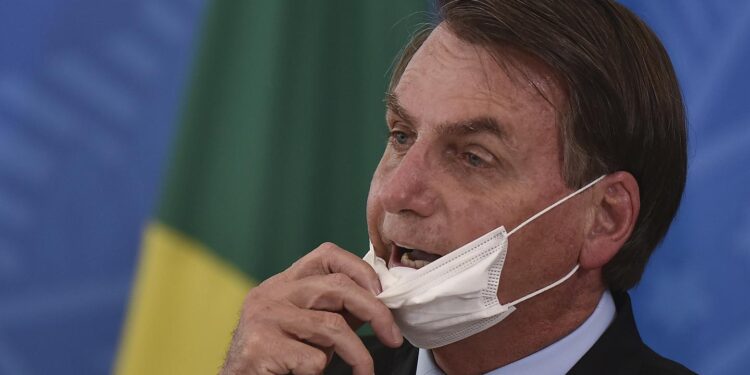 Brazil’s President, Jair Bolsonaro, has sanctioned a law making the use of masks in public obligatory during the coronavirus pandemic.

However, he has vetoed their use in shops, churches and schools.

In a social media broadcast, Mr Bolsonaro said people could have been fined for not wearing a mask at home.

He has refused to acknowledge the gravity of Brazil’s Covid-19 outbreak, despite it having the world’s second-highest numbers of cases and deaths.

The virus has infected almost 1.5 million people and killed 61,884 there since late February, according to data collated by Johns Hopkins University.

BBC South America correspondent Katy Watson says Jair Bolsonaro has never cared much for masks – a health recommendation that has become highly politicised, as has much of the handling of the coronavirus crisis in Brazil.

Even where mask use has been made obligatory not everyone has observed the rules, and enforcement is often pretty lax, our correspondent adds.

The bill passed by the Chamber of Deputies included an article saying that masks had to be worn by people in “commercial and industrial establishments, religious temples, teaching premises and also closed places where people are gathering”.

On Friday, Mr Bolsonaro vetoed the article, arguing that it could lead to the violation of property rights.

He also vetoed another requiring the distribution of masks to the poor.

Congress has 30 days to overrule the vetoes by absolute majority vote.

Last month, a judge ordered the president to wear a mask in public – something he has often refused to do. However, the order was later rescinded by another court.

Mr Bolsonaro has insisted that quarantine and social distancing are not necessary to combat the coronavirus and will only damage the fragile Brazilian economy.

On Thursday night, bars were allowed to open in Rio de Janeiro, where more than 6,600 people have died of Covid-19.

Federal Congressman David Miranda posted a photograph showing dozens of people drinking on a street in the city’s Leblon district without appearing to wear masks or observe social distancing.

“A tragedy foretold,” he tweeted. “[Rio de Janeiro Mayor Marcelo] Crivella’s decision to throw open the doors of business will come with a high cost.”