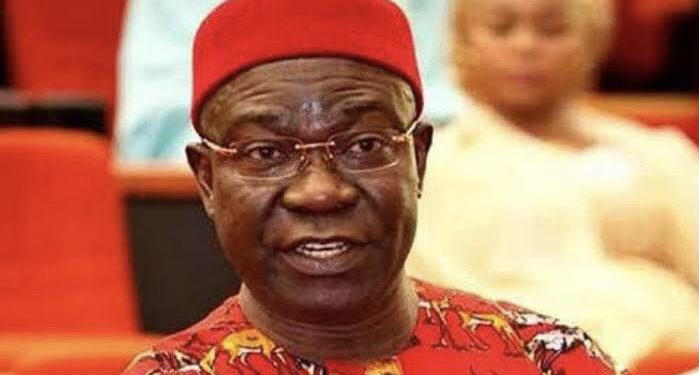 The Economic and Financial Crimes Commission, EFCC, Friday November 4, 2022, secured the nod of a Federal High Court sitting in Abuja to publish an order of interim forfeiture of 40 landed properties belonging to a former Deputy Senate President, Sen. Ike Ekweremadu.

Justice Inyang Ekwo made the order while ruling on a motion exparte brought by the EFCC in Suit No.FHC/ABJ/CS/1242/2022.

The Commission had approached the court for an Order of interim forfeiture of the said properties which “are subject matters of investigation, enquiry and examination by the EFCC. which are reasonably suspected to be the proceeds of unlawful activity of money laundering committed by the respondents”.

It also added that there was need “to preserve the properties from dissipation by the respondents”.

The said application was brought pursuant to Section 17 of the Advance Fee Fraud and Other Fraud Related Offences Act 2006.

In a short ruling on the exparte motion, the Judge granted the application, ordering the EFCC to publish the interim forfeiture order of the properties in a national daily within seven days from the date the Order was given.

Persons interested in the properties covered by the interim forfeiture order are expected to, within 14 days of the publication of the Order, show cause why the assets should not be permanently forfeited.

Justice Ekwo adjourned till December 5, 2022, for a report.

Afeez Mustapha, an investigator with the EFCC, in a supporting affidavit to the application, disclosed that the Commission commenced investigation of Ekeremadu following intelligence received from some foreign entities on suspicion of money laundering involving the acquisition of several properties in United Kingdom, Dubai and the United States of America through proxies and unregistered companies.

The schedule of properties attached to the forfeiture application listed properties allegedly acquired by Ekweremudu with funds not supported by his legitimate income to include, among others, a London property at Flat 4, Varsity Court, Hormer Street ( WIH4NW) which was acquired on December 4, 2008 for £830,000; three properties in Florida, United States, one of which was purchased for $155,000 USD; a property on approximately 3000 square meter parcel of land consisting of 7 bedroom detached Boys Quarters, swimming pool, enclosed 3 car garage with roller shutter doors, gate house and generator house at No.6 Ilado Close, Ikoyi, Lagos bought for N630million on August 8, 2015; three blocks of six flats each, totaling 18 luxury flats at Plot 904 Durumi, Abuja acquired for N700million and Four Rootown House at Villa No. 148 Maeeni the Lahes Emirate Hill Dubai valued at $250,00 USD.