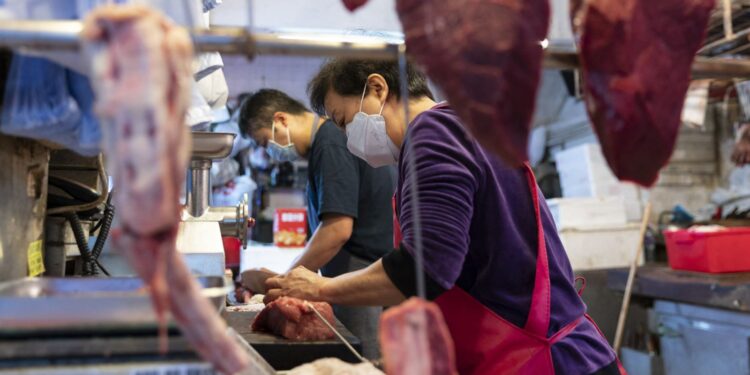 However, the mission has become politically charged, as China seeks to avoid blame for alleged missteps in its pandemic response.

Experts from the World Health Organisation looking into the origins of coronavirus have visited a wet market that provides food for the Chinese city of Wuhan.

The WHO team members were seen walking through sections of the Baishazhou market – one of the largest wet markets in Wuhan – surrounded by a large entourage of Chinese officials and representatives.

The market was the main food distribution centre for Wuhan during its lockdown.

The long-awaited probe comes after months of negotiations between the WHO and Beijing and the group of 10 scientists is hoping to interview people from research institutes, hospitals and the seafood market linked to the initial outbreak.Advertisement

But the mission has become politically charged, as China seeks to avoid blame for alleged missteps in its early response to the outbreak.

COVID-19 was first detected in Wuhan in central China in late 2019.

The country faced a public relations catastrophe in the early months of the outbreak as it attempted to cover up rising numbers of infections, while at the same time setting up temporary hospitals.

The WHO members, with expertise in veterinarian practices, virology, food safety and epidemiology, have so far also visited two hospitals at the centre of the early outbreak: Wuhan Jinyintan Hospital and the Hubei Integrated Chinese and Western Medicine Hospital.

On Saturday, they visited a museum exhibition dedicated to the early history of COVID-19. They also plan to visit more hospitals and markets like the Huanan Seafood Market, which was linked to many of the first cases.

However, a single visit by scientists is unlikely to confirm the origins of the virus.

Pinning down an outbreak’s animal reservoir is typically an exhaustive endeavour that takes years of research including taking animal samples, genetic analysis and epidemiological studies.

One possibility is that a wildlife poacher might have passed the virus to traders who carried it to Wuhan.

The Chinese government has promoted theories, with little evidence, that the outbreak might have started with imports of frozen seafood tainted with the virus, a notion roundly rejected by international scientists and agencies.

A possible focus for investigators is the Wuhan Institute of Virology, which built an archive of genetic information about bat coronaviruses after the 2003 outbreak of SARS – severe acute respiratory syndrome.