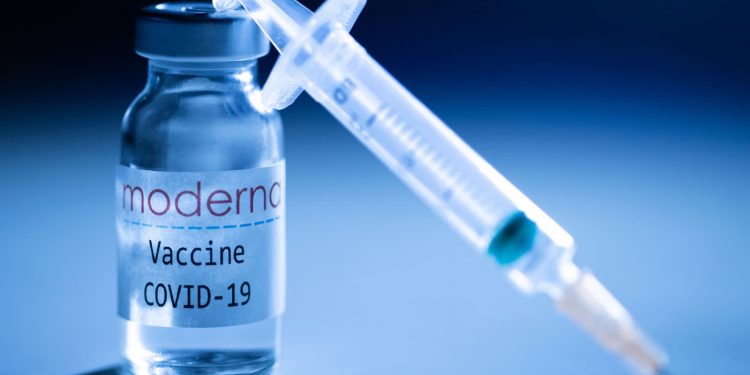 Governor Bababjide Sanwo-Olu of Lagos State on Monday announced plans by the state government to commence the Moderna vaccination for residents against infection of COVID-19 pandemic amid the third wave.

The state, in the first phase of vaccination, had distributed AstraZeneca vaccines to residents.

Sanwo-Olu, while briefing State House Correspondents at Lagos House, Alausa, Ikeja, on the update and situation report on COVID-19 management in the state, expressed the commitment of his administration to fight the virus to its kneel.

He, however, stressed that “It is costly and requires hard work and commitment from a wide range of stakeholders and partners, sacrificing their time and energy and resources on multiple fronts to slow down the virus, and eventually to tame it.”

According to Sanwo-Olu, “of the 601,000 doses earmarked for Lagos, about 299,000 doses of the Moderna vaccine were received from the Federal Government.”

The governor added that vaccination centres have also been increased to 150 to prevent crowding at the centres.

There were about 88 vaccination centres during the first phase of AstraZeneca vaccination. Vaccination would also be by appointment as registration should have been done online before approaching the centres.

According to him, 506 deaths have been recorded so far, with 135 recorded during the third wave.

Sanwo-Olu also disclosed plans to increase the state’s oxygen production capacity to about 1,000 cylinders per day.

According to him: “As a government, we have taken substantial steps to arrest this third wave in its tracks, most notable of them is the increased monitoring and enforcement embarked upon by members of the incident command structure.

“As of August 21, Lagos had recorded 70,563 confirmed cases of COVID-19. Of this number, 60,716 have recovered in-community, and 4,387 are currently being managed actively in-community. About 5,551 patients have been admitted into our various COVID-19 care centres, with 506 registered fatalities, 135 of which happened in this current third wave.

“Lagos State received its allocation of 299,992 doses of the Moderna vaccine on August 18 for the second phase of the national vaccination campaign, which will begin this Wednesday, August 25.

“We have developed an elaborate plan to administer the vaccines in 150 centres. The increase in the number of centres is to prevent the gathering of large crowds and ensure the campaign does not itself become a super-spreader event. We will ensure the administration is based solely on appointments which should be done through nphcda.vaccination.gov.ng.

“Our ultimate goal is to vaccinate 60 per cent of our residents in good time.”

The governor also assured the people that the second batch of Astrazeneca vaccine was expected in one week, and so warned against combining the two types of vaccines.

“Let me also reiterate that this Moderna vaccine should not be mixed with the AstraZeneca vaccine. What this means is that only persons who have not been previously vaccinated at all should take the Moderna vaccine. If you have previously taken one dose of the AstraZeneca vaccine, please exercise patience as we await delivery of a fresh allocation from the Federal Government,” he added.

Sanwo-Olu said: “To help us better manage the pandemic, we have invested in strengthening the capacity of the Lagos State Biobank to sequence positive cases. Sequencing allows us to identify the predominant strains of the COVID-19 virus in our environment and provides us with information on how to better respond to the pandemic.

“With our modelling suggesting that we may be required even more oxygen supply over the next few weeks, we are exploring several ways of increasing our oxygen capacity, including partnering with the private sector. At the moment we have two functioning oxygen plants, at the IDH in Yaba, and in Gbagada, and are looking forward to shortly taking delivery of two additional oxygen plants being built in Lagos State by the Federal Government. Our target is an oxygen supply capacity of 1,000 cylinders per day.

“I appeal for your cooperation. The threat of the Coronavirus is not theoretical, it is very real. We have been on the journey now for about 18 months, and we are all witnesses to the immense disruptions we have seen on every front, not to talk of the many lives that have been lost.

“We are all united in our desire to put this virus and the pandemic behind us as quickly as we can, but this will not happen if we continue to disregard health protocols. We also cannot afford to allow a sense of fatigue to set in. The consequences of this will be enormous”

Sanwo-Olu urged residents to avoid large gatherings as much as possible, avoid all non-essential travel, wear a face mask in all public places, and maintain high levels of personal hygiene at all times.

Recall that the state Commissioner for Health, Prof. Akin Abayomi had earlier assured residents that the second phase of vaccination would soon commence.

Abayomi said: “So if we are beginning to see the beginning of a third wave, we are not surprised that the request for vaccines has also increased.

“Members of the cabinet, Mr Governor and I receive daily calls on when the next batch of vaccines are coming in. I will like to reassure you that the demand for Lagos for vaccines is high none less we still need to hit that high target of 60 per cent vaccination hopefully before the end of this year or going into the beginning of next year if we are going to prevent these waves of new variants coming into Lagos and trying to force us to shut down our economy.

“It is Mr Governor’s determined resolution that Lagos will not shut down its economy again, and for us to do that, it is not just the government; the government will do everything in its power to reduce the opportunity for viruses to come in and create havoc, but it is also a civic responsibility of everybody and that is why we are asking everyone to follow the rules and regulations and be each other’s brother and sister keepers by maintaining social distancing, respiration and personal hygiene and if feeling unwell, get tested for COVID.”

The commissioner noted that Lagos State testing capacity was in the range of three thousand daily stressing that a lot of the COVID tests were done free of charge.

He assured that the state government would continue to make COVID treatment available and do all it can to win the war against the global pandemic.

“We will continue to make an adequate amount of oxygen available for those that need it and we will do everything in our power together with the Federal Government of Nigeria to make available COVID vaccines so that we will be able to meet the deadline line by set by the WHO and other health institutions”, he added.