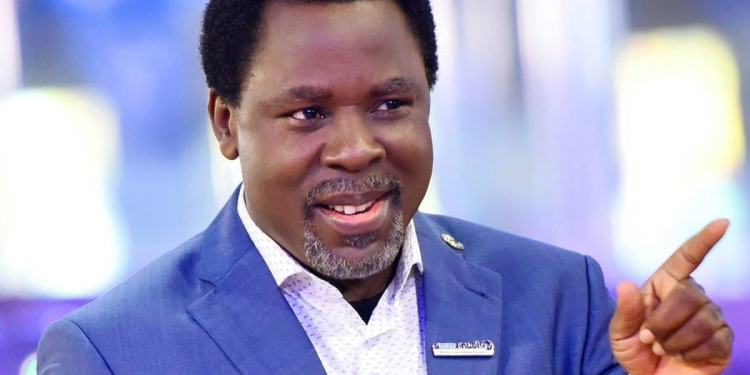 A delegation from the Lagos State Government led by the Commissioner for Health, Prof. Akin Abayomi and the Director General of the Lagos Safety Commission, Mr. Lanre Mojola, yesterday, inspected the Synagogue Church of All Nations (SCOAN).

The visit was to inspect facilities at the church for COVID-19 safety and prevention protocols compliance as part of efforts to halt the importation of COVID-19 variants into Nigeria, especially during the burial of Prophet Temitope Joshua this week.

This is coming one week after the Federal Government said the deadly Delta variant had not yet been discovered in the country, though the Nigeria Centre for Disease Control (NCDC) recorded an escalation in COVID-19 infections at the weekend, with 71 recorded on Saturday as against 40 on Friday.

Of the 71 new cases, Lagos reported 63, while Oyo logged four cases, Ogun had three and Kano one. “A total of 167,803 infections have been confirmed so far, 164,378 of the cases have been discharged and 2,121 deaths have been recorded in 36 states and the Federal Capital Territory (FCT),” NCDC said, adding that the country has so far tested over 2.3 million samples from its roughly 200 million population.

Speaking during a virtual media briefing on COVID-19 at the weekend, the Director-General of WHO, Dr. Tedros Adhanom Ghebreyesus, said globally, there is a lot of concern about the Delta variant.

“As some countries ease public health and social measures, we are starting to see increases in transmission around the world. More cases mean more hospitalisations, further stretching health workers and health systems, which increases the risk of death,” he warned.

In his reassurance last week, Chairman of the Presidential Steering Committee (PSC) on COVID-19 and Secretary to the Government of the Federation, Boss Mustapha, said the Delta variant, first identified in India, is more contagious than the UK variant and as such, Nigeria needs to tighten its borders to prevent the influx of passengers with the Delta variant.

“The four major variants of concern are now classified as Alpha (UK), Beta (South Africa), Gamma (Brazil) and Delta (India). The Delta variant, which has wreaked devastating havoc, is not yet found in Nigeria, hence the need to tighten our borders and be more vigilant,” he said.

Not leaving anything to chance, the Lagos State government, yesterday, inspected facilities at the Ikotun centre of SCOAN as it prepares to host visitors from across the world beginning from today for the week-long funeral activities of its late founder, Prophet Temitope Balogun Joshua.

Speaking after the inspection of the church facilities and meeting with the church officials, Abayomi said the inspection was in line with the third wave mitigation strategy of the Lagos State government to prevent the importation and spread of new deadly strains of COVID-19 into Lagos and Nigeria.

Abayomi added that the inspection and meeting with officials of SCOAN was to limit any possibility of the introduction of foreign COVID-19 variants among the congregation and by extension to the community.

He said, “On behalf of the Lagos State government we want to offer our deep condolences to the family of the prophet and members of the congregation. In these very precarious times that we are in, with a global pandemic that is evolving dynamically; what we now know is that there are different strains of the virus circulating around the world, and Lagos State has a very strong third wave prevention strategy.

“The likely cause of a third wave is going to be an importation from visitors who are infected with the virus, so we are particularly careful about working with the Synagogue to make sure that we have a collaboration that will reduce the opportunity to zero of us either importing a virus or even allowing someone who is positive to interact with the community.

“And the Incident Commander, Mr. Governor has said that this a priority event and we have to ensure that we give SCOAN all the support it requires to make sure that the series of planned events for the funeral scheduled between July 5 and 11 are performed under the strictest guidelines to limit any possibilities of introduction of foreign COVID variants among the congregation or the movement of the virus in such an environment that would make transmission easier.

“So, we have engaged with several stakeholders, we are looking at the airport and the land borders. Any visitor coming into the country has to go through the mandatory seven days of isolation plus testing before they can participate in any of the activities. We have inspected all the accommodation, we have looked at the auditorium and we have calculated how to completely eliminate the chance and the risk of infectious transmission.”