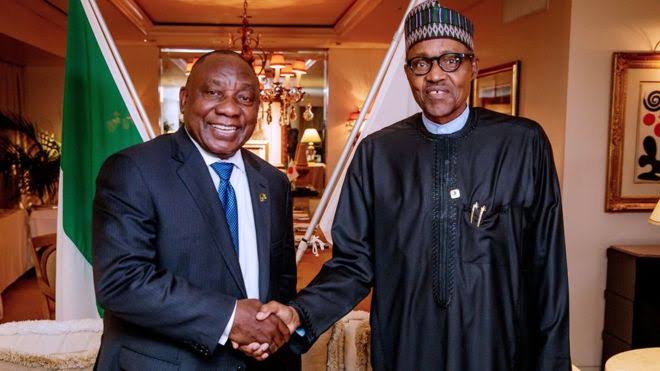 Nigeria yesterday expressed solidarity with South Africa as it struggled with some of the difficulties posed by a new COVID-19 variant, Omicron, discovered in the country. The Nigerian government warned Western countries against discrimination against South Africa following travel restrictions imposed on Southern African countries in the aftermath of the new virus discovery.

The federal government said President Muhammadu Buhari would go ahead to receive South African President Cyril Ramaphosa, who had been scheduled to visit Nigeria from today with other top officials of his administration, on a three-day visit.

Minister of Health, Dr. Osagie Ehanire, stated Nigeria’s position in a chat with THISDAY ahead of a media briefing scheduled for today in Abuja on the matter.

Ramaphosa called for reversal of the travel restrictions.

In a similar vein, President of the African Development Bank (AfDB), Dr. Akinwumi Adesina, yesterday voiced displeasure at the stigmatisation and penalisation of Africa for new COVID-19 variants discovered on the continent. Adesina urged the acceleration of vaccine production in Africa.

Likewise, some members of the organised private sector (OPS) advised the federal and state governments in Nigeria to take proactive steps to prevent the spread of the COVID-19 virus.

That was as Governor of the Central Bank of Nigeria (CBN), Mr. Godwin Emefiele, said at the weekend in Lagos that the dire implications of the food export restrictions by some countries during the COVID-19 lockdown in 2020 should not be lost on Nigeria.

“So, the federal government condemned the rush to ban or isolate South Africa by European countries, without isolating Belgium, Italy and other European countries that have more direct flights into the United States of America and among themselves,” he said.

The minister argued that the position of the Western countries on the virus was not backed by science, saying so far, even if it is a mutation, the new COVID-19 variant has not caused any new deaths or proved to be worse than the Delta variant.

Ehanire stated, “Therefore, the world should wait for that time, than to be enmeshed in heavy discrimination against South Africa. Why would they isolate South Africa? The federal government would open its doors to Ramaphosa and others who are coming from South Africa until science says otherwise. People should be vigilant.”

The AfDB president, who wrote on his Twitter handle, stressed that Africa was not the source of the COVID-19 virus, which had continued to put the world on edge.

The new COVID-19 variant was first discovered in South Africa and has since been detected in Australia, United Kingdom, Germany, Israel, Italy, the Czech Republic, and Hong Kong.

Owing to its discovery, Israel on Saturday announced that it was banning all foreigners from entering the country. The ban, pending government approval, was expected to last two weeks. Israelis returning from countries on the red list, which included countries in Southern Africa, would be required to isolate for seven days in a designated hotel.

Australia also banned the entry of foreigners who had travelled to nine Southern African countries in the past 14 days, including South Africa, Lesotho, Botswana, and Zimbabwe.

But Adesina warned, “Africa should not be labelled and penalised for COVID-19 variants and mutations that occur randomly elsewhere in the world. Africa is not the source of COVID-19.

“There must be global justice, equity and fairness in access to vaccine. Global vaccine supply system has underserved Africa. Protecting one’s home alone in the midst of a forest does not work.

“Africa must accelerate the manufacturing of its own vaccines and set up its own ‘healthcare security defence system’. Africa must no longer outsource health security of its 1.8 billion people to the benevolence of others.”

Emefiele reiterated the need for Nigerians to look inwards, considering the country’s huge population. He said the pandemic presented an opportunity to fix critical infrastructure in the country so as to reduce dependence on other countries for most of the continent’s needs.

The CBN governor stated, “As I’ve asked in some of my recent treatises on the opportunities of the pandemic, what if the pandemic occurs again and we witness an extended restriction in movements and export bans? What if these restrictions become a new normal? What if another pandemic occurs in which all borders are closed, with food and medical imports significantly curtailed? What if the rich among us, even when they can afford to pay for their medical bills abroad, cannot travel out of our shores because of these extended lockdowns?

“Are we going to allow our hospitals to remain in their current state without equipment and state of the art facilities? For how long shall we continue to rely on the world for anything and everything?”

He noted that in 2020, following the provision of vaccines, countries began to ease movement restrictions and demand in certain sectors began to recover to pre-COVID levels. Unfortunately, the surge in demand for the vaccines contributed to significant supply chain disruptions, which contributed to elevated inflation in advanced and developing markets, Emefiele added.

“For example,” he said, “the Food and Agriculture Organisation (FAO) food price index, which measures monthly change in international prices of a basket of food commodities, in October 2021, stood at its highest level since July 2011, because of the initially exogenous supply disruption I am about to describe.

“Finally, tragic as these outcomes were, even more alarming was the reaction of many countries at the height of the pandemic. All over the world, countries responded by fighting for themselves and taking measures to protect their own people, regardless of the spill-over effects on the rest of the world. According to the World Customs organisation, a total of 32 countries and territories adopted stringent and immediate export restrictions on critical medical supplies and drugs that were specifically meant to respond to COVID-19.”