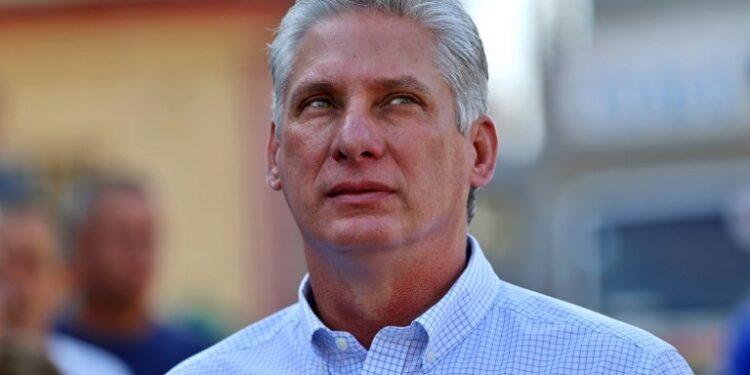 Miguel Díaz-Canel becomes head of the Communist Party, and retains the title of president.

Miguel Díaz-Canel has been named first secretary of the Cuban Communist Party (PCC), the most powerful role on the island. He will be the first person without the name Castro to run Cuba since the 1959 revolution.

The move, announced Monday, was widely expected. It means the tall, silver-haired 60-year-old now holds Cuba’s two most important positions, head of the party and president of the state, and buries rumours that he was a placeman, subject to more powerful forces.

“I never believed that rumour,” says former Cuban diplomat Carlos Alzugaray. “He was in charge, probably in direct consultation with Raúl Castro. But I think the signal is that he’s in charge of everything now. He stands way over everybody else.”

An electrical engineer by training, Díaz-Canel has for much of his life been a party functionary, albeit a fast-rising one. He was born a year after the revolution, in Villa Clara, the province where Che Guevara broke the will of Fulgencio Batista’s troops, bringing about the revolution.

People who knew him as a young man said he was a witty and personable party secretary in Villa Clara and then Holguin in eastern Cuba. He was also praised as a thorough and engaged minister of higher education. But since rising to national prominence, he has seemed to strike a distant and difficult-to-read figure.

Raúl Castro first appointed him vice president (of the council of ministers) in 2012, shortly after he himself had replaced his brother Fidel as first secretary of the party. It was the first real indication that Díaz-Canel was being prepared for power.

The makeup of the new Politburo that will guide Cuba through the next years was also announced Monday. Its members face huge challenges as the state struggles with the coronavirus, United States sanctions, crumbling infrastructure and embedded bureaucracy.

“The main challenge will be economic,” says Jorge Duany, director of the Cuban Research Institute at Florida International University. “This is not really rocket science. It’s recognition that Cuba is facing the worst economic crisis since the early 1990s.”

In the appointments to the Politburo, Raúl Castro has made good his promise to rejuvenate the leadership. Two veterans of the revolution, 90-year-old José Ramón Machado Ventura and 88-year-old Ramiro Valdés Menéndez, have retired with him.

His promise to diversify the leadership looks less impressive: only three of the 13-strong inner circle are women, and there don’t seem to be many new non-white faces.

The most significant new member is Raúl Castro’s former son-in-law, Luis Alberto Rodríguez López-Calleja. He runs GAESA, the business wing of the military that controls much of Cuba’s economy, building hotels and running financial services, supermarkets and imports and exports.

López-Calleja is said to wield huge influence. He travelled with Díaz-Canel to the United Nations and to Russia to meet Vladimir Putin. He was sanctioned by the US in September 2020.

Another new member is Prime Minister Manuel Marrero Cruz, believed to be a close ally of López-Calleja. He has impressed Cubans as personable on Mesa Redonda, the round table that is broadcast to the nation and that has been an important source of news during the coronavirus pandemic.

As Díaz-Canel assumed the role of first secretary on Monday, he told the closing meeting of the 8th Congress of the PCC that he would remain in close contact with Raúl Castro, continuing to discuss all strategic decisions.

This corresponds with his insistence that he represents continuity rather than any break with the past. He tweets under the hashtag #SomosContinudad and the Congress itself took place under the banner “Unity and Continuity”.

During his time in the slightly lesser role of president, Díaz-Canel has faced difficult moments. There was a 2018 domestic plane crash that killed 112 and a tornado strike in Havana that killed six and injured 195. He faced criticism for not coming across as empathetic as Fidel, an admittedly high benchmark to meet.

For Habaneros now waiting all day to buy meat and medicines, in some cases sleeping on stairways so they can join queues as soon as the COVID-related nightly curfew lifts at 5am, continuity isn’t music to the ears.

“I think there is little hope and a lot of tiredness and boredom,” says Rafa Escalona, director of the popular Cuban magazine AM:PM. “The incorporation of a new generation, despite having the powerful – if double-edged – card of not being ‘Castro’, has already been squandered, remaining only as mere ‘continuators’ of the worst of the inherited policies.”

There are efforts to humanise the new leader. Just before the Congress, the magazine Somos Jóvenes – We are Young – published an illustration offering “six things you don’t know about Díaz-Canel.”

He enjoys singing, apparently, even if he’s out of tune. He’s a fan of classic rock. He’s a tech geek. And he’s a grandfather who loves to spoil his grandchildren. Only one question was left unanswered: what will he do now that he controls the levers of power in the Cuban state?