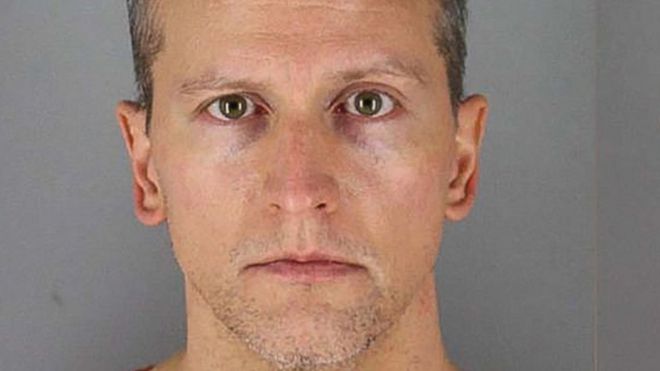 The former US police officer charged with the murder of unarmed black man George Floyd has been released from prison on bail.

The white officer was filmed pressing his knee on Mr Floyd’s neck for almost eight minutes before he died on 25 May.

Mr Chauvin was fired from his job and now awaits trial in March next year on charges of second-degree murder and manslaughter. Three other officers – J Alexander Kueng, Thomas Lane and Tou Thao – were also fired and charged with aiding and abetting murder.

All four officers accused in connection with the killing of Mr Floyd in Minneapolis, Minnesota, have now posted bail and are free until their trial next year.

Chauvin had been at the maximum-security prison in Oak Park Heights, Minnesota, since late May.

In June, a judge set a bail of $1.25m with no preconditions, or $1m with conditions which include Mr Chauvin not contacting Mr Floyd’s family, surrendering his firearms and not working in law enforcement or security as he awaits trial.

Mr Chauvin was released on conditional bail, which court records showed was guaranteed by a bail-bond agency, CBS Minnesota reported.

In the US, bail-bond agents promise to pay authorities the full bail amount for defendants if they cannot afford do so or fail to appear at court.

Mr Chauvin was released from custody shortly before 11:30 local time (17:30 GMT) on Wednesday, according to the Hennepin County Sheriff’s Office.

Ben Crump, a civil rights lawyer representing Mr Floyd’s family, said Mr Chauvin’s release on bail was a “painful reminder” that “we are still far from achieving justice for George”.

“Although George Floyd was denied justice in life, we will not rest until he is afforded full justice in death,” Mr Crump said.

Currently, all four accused officers are scheduled to face trial together in March, but a judge is considering trying them separately.

The incident that led to their prosecution highlighted deep wounds over racial inequality in the US.

The Black Lives Matter demonstrations – some of which turned violent – became a central political issue in the run up to November’s presidential election in the US.