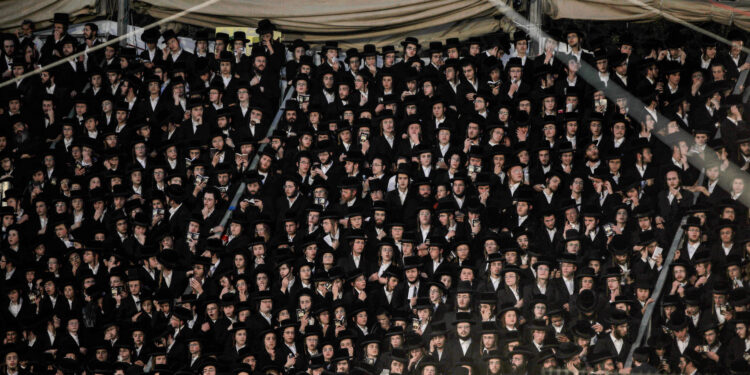 TOPSHOT - Ultra-Orthodox Jews gather at the grave site of Rabbi Shimon Bar Yochai at Mount Meron in northern Israel on April 29, 2021 as they celebrate the Jewish holiday of Lag BaOmer, marking the anniversary of the death of the Talmudic sage, approximately 1,900 years ago. - In a night-long vigil thousands of Jews will light large bonfires and visit the final resting place of Bar Yochai, who is revered as one of Judaism's great sages. (Photo by JALAA MAREY / AFP) (Photo by JALAA MAREY/AFP via Getty Images)

A stampede at a religious festival attended by tens of thousands of ultra-Orthodox Jews in northern Israel has killed at least 44 people and injured about 150 early Friday, medical officials said.

Magen David Adom, the Israeli emergency service, said that at least 44 people were killed during the event early on Friday, adding “MDA is fighting for the lives of dozens wounded, and will not give up until the last victim is evacuated.”

Zaki Heller, spokesman for the Magen David Adom, said that among the 150 people who had been hospitalized, six were in critical condition.

On social media, Prime Minister Benjamin Netanyahu called it a “heavy disaster” and added: “We are all praying for the wellbeing of the casualties.”

Netanyahu arrived at the scene of a stampede on Friday, with television images showing the veteran premier touring the site of the incident.

The stampede occurred as tens of thousands of mainly ultra-Orthodox Jews were participating in an annual pilgrimage for the feast of Lag BaOmer, in Mount Meron, around the reputed tomb of Rabbi Shimon Bar Yochai, a second-century Talmudic sage.

The incident began when large numbers of people trying to exit the site thronged a narrow tunnel-like passage, according to witnesses. People began falling on top of each other near the end of the walkway, as they descended slippery metal stairs, witnesses said.

“Masses of people were pushed into the same corner and a vortex was created,” a man identified only by his first name Dvir, told Israel Army Radio. He described a terrifying sight as the first row of people fell down. He said he was in the next row of people that tripped.

A video posted on social media by Israel’s public broadcasting, Kan, showed a jampacked crowd of pilgrims walking in the narrow lane.

Yehuda Gottleib, one of the first responders from United Hatzalah, said he saw “dozens of people fell on top of one another during the collapse”.

“A large number of them were crushed and lost consciousness.”

Israeli media published an image of a row of bodies covered in plastic bags on the ground.

Emergency services deployed six helicopters to evacuate the injured. Some of the injured have been transported by military helicopter to Tel Aviv and Jerusalem, rescue workers said.

Authorities had authorised 10,000 people to gather at the site of the tomb but organisers said more than 650 buses had been chartered from across the country, bringing at least 30,000 pilgrims to Mount Meron.

Al Jazeera’s Harry Fawcett, reporting from northern Israel, however said that there have been reports that the crowd could be more than 100,000.

“There is no question that there was an enormous number of people at this very significant religious event…and certainly the videos bear that out.”

Eli Beer, director of the Hatzalah rescue service, said he was horrified by how crowded the event was, saying the site was equipped to handle perhaps a quarter of the number who were there, he told the Army radio station.

About 5,000 police had been deployed to secure the event, the country’s largest public gathering during the coronavirus pandemic.

Witnesses said they realised people had been asphyxiated or trampled when an organiser appealed over a loudhailer for the throng to disperse.

“We thought maybe there was a (bomb) alert over a suspicious package. No one imagined that this could happen here. Rejoicing became mourning, a great light became a deep darkness,” a pilgrim who gave his name as Yitzhak told Channel 12 TV.

“Rabbi Shimon used to say that he could absolve the world … If he didn’t manage to cancel this edict on the very day of his exaltation, then we need to do real soul-searching.”

Lazar Hyman of the United Hatzalah volunteer rescue service, who was at the scene, told AFP news agency: “This is one of the worst tragedies that I have ever experienced.”

“I have not seen anything like this since I entered into the field of emergency medicine,” he added.

Private bonfires at Mount Meron were banned last year due to coronavirus restrictions, but lockdown measures were eased this year amid Israel’s rapid COVID-19 vaccination programme that has seen more than 54 percent of the population fully vaccinated.