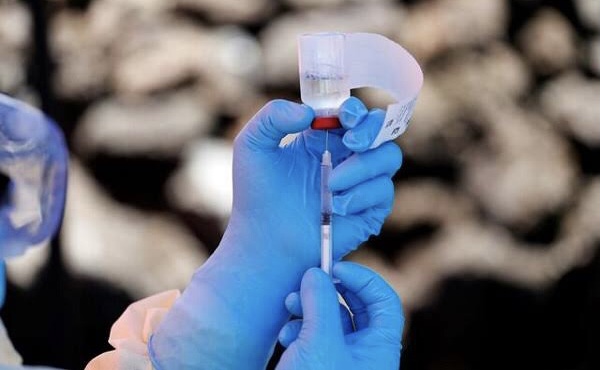 Joseph Singiringabo has lost almost everything and everyone he held dear to Ebola. In a few short weeks, the 78-year-old lost his wife, his son, and a newborn granddaughter to the disease.

He is left taking care of three grandchildren under 13 after their mother fled the village to escape the danger of Ebola. His livestock was stolen while he was away in the required 21-day quarantine, leaving him destitute and desperate.

A man disinfects facilities at an isolation center in Mubende district, Uganda, Nov. 1, 2022. The Ministry of Health figures showed that as of Oct. 26, the country has registered 115 confirmed Ebola cases, 32 deaths since the outbreak was announced on Sept. 20.

“I don’t know where they got the virus from because I went and got checked and I left the hospital without any problem with these children of mine,” he said, sitting on a log outside his modest house in Madudu, in Uganda’s central Mubende district.

“The problem I am facing now is getting food. Secondly, I never went to school, but I want these grandchildren to continue and get educated.”

Uganda is grappling with its deadliest Ebola outbreak in more than a decade, first detected in the Mubende district in late September.

The deadly disease has ravaged families, leaving authorities scrambling to control its spread.

The 2012 Ebola outbreak in the Kibaale district in the country’s western region, led to 17 deaths out of 24 confirmed cases but was declared over in less than 3 months.

Officials have launched aggressive contact tracing to track down relatives and friends who handled the bodies of first victims or attended funerals.

Some escaped from quarantine facilities, others traveled as far as the capital Kampala, and a few visited traditional healers and witchdoctors for treatment instead.

“Some of the patients are still hiding and they don’t know that they have Ebola so they’re out there in the community,” public health physician Dr. Jackson Amone told CNN.

He has been involved in every Ebola outbreak in Uganda as well as in Sierra Leone in 2017. “We need to do case investigation, a lot of contact tracing, and community engagement so that those who present with Ebola symptoms are brought for testing before we release them.”

Dr. Amone is leading the teams operating the Ebola Treatment Units in Mubende. The first was set up in a hurry on the edge of the Mubende Regional Referral Hospital.

A larger center operated by the medical non-profit Médecins Sans Frontières (MSF) is expanding with new ICU beds on the other side of town.

In one zone, a health worker cradles a three-month-old baby suspected of having been infected. Her mother and another sibling are undergoing treatment for Ebola and the disease has already claimed the life of her father.

It’s a cruel welcome to the world for the infant who is wrapped in a blanket as steady rain falls on the makeshift treatment center.

It’s a familiar story across this region as Ebola spreads despite the Ugandan government’s best efforts.

“This Ebola is much easier to deal with than either corona(virus) or AIDS. The main problem here is behavior change,” President Yoweri Museveni told the nation in a Tuesday night address, stressing the need to follow the government’s procedures for those who come into contact with the disease.

Ebola can spread from person to person through direct contact with blood or other bodily fluids such as saliva, sweat, semen, or feces, or through contaminated objects like bedding or needles.

“It doesn’t spread through the air like COVID-19 and does not hide for some months before it shows itself like AIDS,” Museveni said in his televised address.

The country had so far recorded 55 deaths from Ebola, 141 confirmed cases and 73 people had recovered, he said.

Health minister Dr. Jane Ruth Aceng Ocero told CNN she expects Uganda to have the outbreak under control by April if communities cooperate with the government.

There are currently two licensed Ebola vaccines, according to the World Health Organisation, but they were developed to be safe and protective against the Zaire strain of the Ebola virus.

Unlike the previous Zaire ebolavirus, the Sudan strain currently circulating in Uganda has no known effective treatment or approved vaccine. However, the country is about to roll out three trial vaccines that have been certified as safe by the World Health Organization (WHO) working group.

The WHO said the first doses would be shipped to Uganda next week and the country expects to expand the vaccine trials after reviewing results from the initial phase.

They are manufactured by the International Aids Vaccine Iniative (IAVI), the Sabin Vaccine Institute USA and a third developed by the University of Oxford and the Jenner Institute UK.

“Our further testing is about efficacy, and how long it protects. We are looking at 3,000 contacts of confirmed cases so we’ll be doing ring vaccination,” Aceng Ocero said, referring to a vaccine process that administers vaccines only to people in close contact with infected patients.

“If we have a confirmed case, then the contacts are the ones who are given the vaccine and they are followed up for 29 days because we want to see if they can quickly generate antibodies and can protect themselves from getting into full-blown disease,” Aceng Ocero added.

Obstacles of tradition and religion

Public health officials believe that cases are stabilizing due to increased vigilance, but tradition and religion are holding back progress. One community in Kassanda district, central Uganda, exhumed a body that had been buried safely by health workers to perform religious rites.

It led to “an explosion of over 41 cases within 5 days and 10 deaths,” President Museveni said in his address. He has now barred traditional healers and witchdoctors from taking clients during the Ebola outbreak.

Infections are also rising as it is hard to keep people apart in close-knit communal settings. Robert Twinamasiko, a 30-year-old driver is undergoing treatment after he helped an infected friend to an ambulance. The friend and one other person involved both died.

Twinamasiko has spent 17 days in hospital but says he has no regrets. Although he looked frail, he was making a recovery and told CNN he was looking forward to going home.

“I’m just waiting for my blood work to be discharged but the world out there should know that Ebola is real,” he said from inside a red zone.

Uganda is also trying to contain the spread of the disease by closing the school term early to avoid an outbreak of Ebola in schools which could be hard to manage. “If you have one learner in a class testing positive, the entire class has to undergo quarantine. But also, you will not be 100% sure that that learner did not have contact with other learners outside that class,” Minister Aceng Ocero explained.

She said she was frustrated that Uganda wasn’t getting enough credit internationally for managing the Ebola crisis. “We have experience. This is our eighth Ebola outbreak. Every time we get an outbreak, our experience increases,” she said.

Some global health experts have criticized Uganda’s initial response to the outbreak as slow and inept. Some partners in the donor and diplomatic community have also bristled about how much information Ugandan authorities are sharing with them.