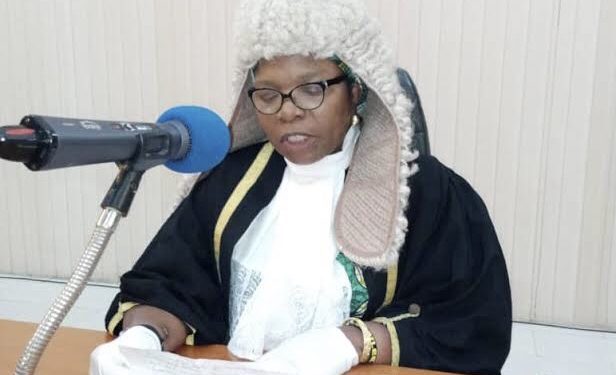 The Ekiti State House of Assembly Speaker, Gboyega Aribisogan, has been sacked by members of the House.

Aribisogan was sacked on Monday, barely after six days in office as Olubunmi Adelugba was elected as the new Speaker.

Seventeen out of the 25 members impeached the Speaker and elected a new one.

The Assembly Complex was earlier sealed as members were embroiled in a controversy following the death of the former Speaker, Funminiyi Afuye.

A month after his demise, the parliament held an election and Aribisogan, who is the representative of Ikole 1 Constituency in the Assembly and a two-term lawmaker, emerged.

Aribisogan had accused former Governor Kayode Fayemi of sponsoring some lawmakers to sack him.

The embattled speaker, who spoke on a Channels TV programme, ‘Sunday Politics’, alleged that the former governor was against his emergence because he was perceived as a betrayer.

He claimed that some lawmakers loyal to Fayemi had perfected plans to impeach him on Monday (today) during plenary.

The former leader of Government Business, who emerged as speaker having polled 15 votes to defeat his rival, Bunmi Adelugba, said happenings in the Assembly since his emergence were plotting to remove him from office and impose Adelugba.

Aribisogan, in his TV interview on Sunday, said, “When Fayemi called us to his residence and said he wanted us to support Hon Adelugba, I stood up to say that could not be done by fiat or by imposition; that we had leaders that we had to consult and that we would get back to them. Ordinarily, we should be looking at the constitution and the standing order of the House.”

He said he still tried to reach Fayemi through a text message on Saturday night, saying, “Up till now, he has not done anything on it, but he has been calling our members to go and impeach me tomorrow (Monday). As I speak with you, seven of our members are locked up in a guest house in Ado Ekiti in cahoots with some of his former aides.

“They don’t want democratic processes to take place in the Assembly and these people are even with arms, saying they are going to assassinate the speaker and take over the place tomorrow (Monday) morning.

“Majority of the members of the Assembly voted for me, but a few of them, who felt that perhaps I did not follow the directive of the former governor of the state, felt that they would make the place ungovernable for my administration.”

The Speaker said, “The Special Adviser on Political Matters to Governor Biodun Oyebanji assured that the government was looking into it and that there would be amicable resolution until about 24 hours ago when we began to see that some clandestine moves are being made to invade the House of Assembly on Monday morning.

“I want prominent people in Ekiti State like Aare Afe Babalola, Chief Wole Olanipekun and Femi Falana and all our traditional rulers to be on the lookout and save democracy in Ekiti State.”

The Special Adviser to Governor Oyebanji on Media, Yinka Oyebode, who spoke on the programme, ruled out chaos in the Assembly.

He said, “I will assure you there won’t be breakdown of law and order on Monday because the governor is in touch with all the warring factions to ensure that they reconcile amicably their differences. I believe that we have absolute confidence in the leadership of the House. They have been there for almost three and half years and it has been rancour-free.”