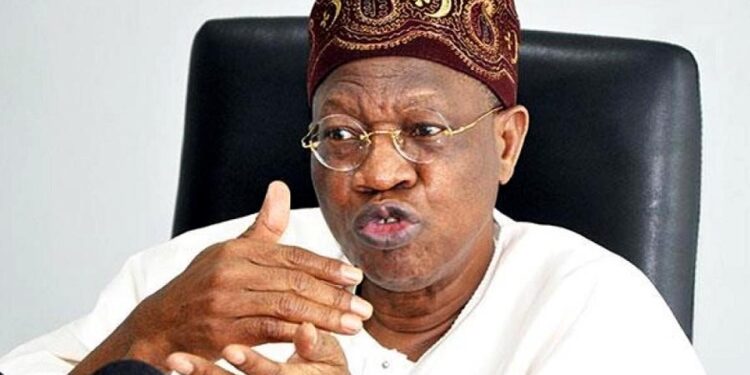 The Federal Government has lashed out at the Canadian government and microblogging platform, Twitter, accusing them of double standard over their handling of truckers’ protest against Covid-19 restrictions in Canada.

The Canadian Prime Minister, Justin Trudeau, had hit out at protesters as truck drivers converged at the nation’s capital, describing their action as unacceptable.

Also, Twitter suspended the account of the Canadian truckers protesting over COVID-19 vaccine mandates and other restrictions around the pandemic.

Recall that the Canadian government, had in the wake of the #EndSARS protest against police brutality that took place in October 2020, that later went violent, condemned the Nigerian government for the actions taken to quell it.

The Nigerian government position was made known by the Minister of Information and Culture, Lai Mohammed, during a news briefing on Sunday in Abuja, where he said that Canadian protesters who have blocked roads and resorted to inconveniencing others have been called terrorists or insurrectionists by the Canadian government.

Mohammed who said that these protesters have been subjected to a number of clampdowns by the Canadian government and private organizations, pointed out that the Nigerian government is only calling attention to the double standards involved in the way protesters deemed to be violent are perceived in Nigeria and in the West.

He noted that the crowdfunding company GoFundMe has shut down the campaign to raise funds for the truckers, after they raised over $10 million, adding that Twitter has suspended the truckers account while the Ontario government has frozen access to millions of dollars donated through online fundraising platform GiveSendGo to the protesters.

The statement from Lai Mohammed partly reads, ‘’I am sure you journalists are watching with keen interest the events unfolding in Canada, where truckers are protesting over Covid-19 vaccine mandates and other Covid-19 retsrictions.

“The Canadian protesters, who have blockaded roads and resorted to inconveniencing others, have been branded as terrorists or insurrectionists and subjected to a number of clampdowns by government and private organisations.

“The crowdfunding company GoFundMe has shut down the campaign to raise funds for the truckers, after they raised over $10 million, adding that Twitter has suspended the truckers account while the Ontario government has frozen access to millions of dollars donated through online fundraising platform GiveSendGo to the protesters.

“Jim Watson, the Mayor of Ottawa, Canada’s capital city, has also declared a state of emergency in the city in response, saying the protests posed a threat to residents’ safety.

“Recall, gentlemen, that during the EndSARS protest, which culminated in the blockage of public roads and massive destruction of government and private property, Canada was one of the countries that spoke out in support of the protesters,” he said during a press conference in Abuja on Sunday.

“Recall also that Twitter actively supported the EndSars protesters and even helped them to raise funds while GoFundMe was used to raise funds for the protests.

‘’These are the same entities that are now rushing to distance themselves from the protesters in Canada and even denying them the use of their platforms.

“This is similar to what played out during the January 6th 2021 insurrection at the US Capitol In Washington, D.C. where those involved are either still being investigated or have been charged to court. I don’t blame them. Nobody wants their country destroyed under the guise of protests.”

He, however, stated that the essence of the news briefing was not to gloat over the unfortunate development in Canada.

The Minister said, “Don’t misunderstand this intervention. We are not gloating over the unfortunate development in Canada. But we are only calling attention to the double standards involved in the way protesters deemed to be violent are perceived in Nigeria and in the West.

“Those who referred to the hoodlums who destroyed public and private property in Nigeria under the guise of EndSARS as peaceful protesters have tagged similar protesters in their own countries as insurrectionists and terrorists. This glaring double standard should not be lost on all Nigerians.

“We have always said that you must have a country before you can even enjoy the freedoms guaranteed by your country’s constitution. If there is no Nigeria, no one will be talking of freedom of expression or freedom of association and the likes.

“This realisation explains why every country goes the extra mile to protect and preserve itself. And this also explains why we have continued to insist on the regulation of social media to ensure responsible content. In this area, I can confidently say we are far ahead of most countries in the world, who have now realized that social media must be regulated in the interest of their own people.’’

Recall that the Canadian government in its criticism of the Nigerian government’s handling of the #EndSARS protest in October 2020, said it was deeply concerned about the excessive use of force by the government saying that those responsible for human rights violations and abuse must be held accountable.

Yemen most at risk of humanitarian catastrophe in 2021: IRC