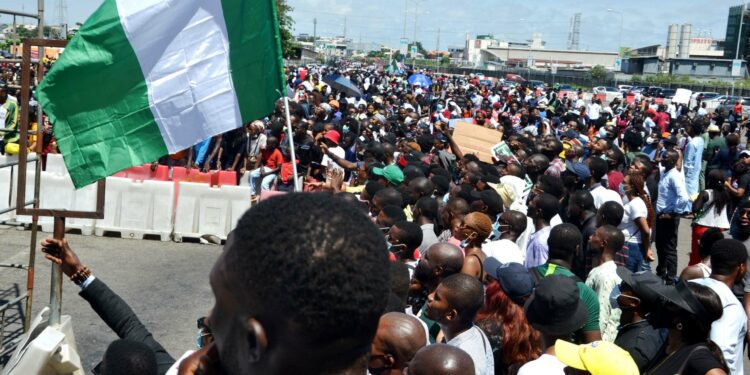 The Lagos State Government has repaired the Admiralty Circle toll plaza on the Lekki-Ikoyi link bridge and the Lekki toll plaza along the Lekki-Epe Expressway ahead of the planned re-opening of the tollgates, The PUNCH has learnt.

The tollgates, which were the epicentre of the protests, were shut during the #EndSARS protests in October 2020 but were eventually burnt after the shooting of unarmed civilians on October 20.

Our correspondent learnt that the display boards on the tollgates had begun advertising again, generating some revenue for the Lekki Concession Company which operates the tollgates on behalf of the state government.

The display boards are operated by Loatsad Promomedia Limited, an advertising firm owned by Seyi Tinubu, the son of All Progressives Congress leader, Bola Tinubu.

The Judicial Panel of Inquiry and Restitution set up by the state government to investigate cases of brutality and human rights violations committed by operatives of the dissolved Special Anti-Robbery Squad ordered gave the LCC the permission to re-open the tollgates on February 6, 2021 which sparked outrage among youths.

The Managing Director of the LCC, Yomi Omomuwasan, had stated at a press conference alongside the Commissioner for Information, Gbenga Omotosho; and the Chief Press Secretary to the governor, Gboyega Akosile, that it would take three to six months to repair the toll gates before it would be officially re-opened.

Months after repairs, however, the state government has yet to re-open it.

Both the commissioner and the governor’s spokesman did not immediately respond to calls on Tuesday.

However, a top government official who wished to remain anonymous said the state government was waiting for the panel to complete its task and submit its report before re-opening the tollgates.

He said, “It is true that the tollgate is supposed to have re-opened but we are also gauging the mood of the public especially now that some people are threatening to stage another protest. The panel is supposed to complete its task and submit its final report by the end of this month.

“After the report has been submitted and some recommendations are implemented, then the toll gates could be re-opened.”