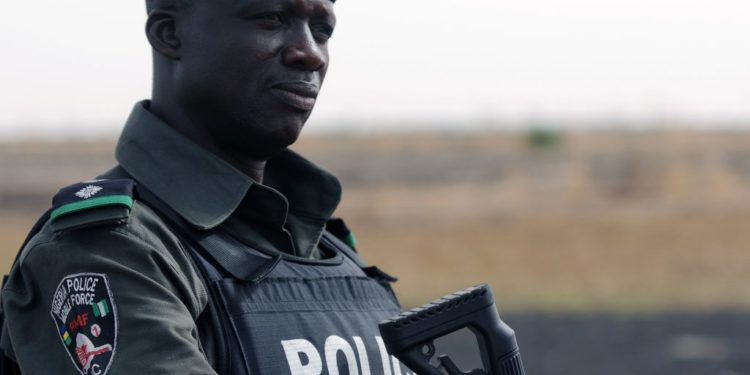 The widow of a late Police Inspector Ayodeji Erinfolami, has alleged that some officers killed her husband while he was trying to quell the #EndSARS protest on October 12, 2020.

The woman, Olamide Erinfolami, made this accusation at the Friday hearing of the Lagos State Judicial Panel investigating cases of police brutality.

She alleged that the police, which suffered severe attacks, including burning down and looting of many stations killed one of their own during the protests.

While being led in evidence-in-chief by family’s counsel, Mr. Gbemiga Ogunleye, the late inspector’s wife narrated how she spoke with her husband on phone on October 12 before he left for work.

She told the panel that her husband worked with the police for 18 years and as at the time of his death, the late Ayodeji was with Area C, Surulere, Lagos.

“I was later told that he had been shot. I called initially, nobody picked but when it was eventually picked, I was told by a policewoman that my husband was dead,” she said.

She claimed that since her husband’s demise, nobody has visited her family till she came to the panel.

She further explained that she learnt from someone from Maiduguri that her husband had been killed during EndSARS protest in Lagos.

During cross examination, Mrs. Olamide admitted before the panel chaired by Justice Doris Okuwobi (rtd.), that her husband was rushed to the hospital by the police, received treatment at a nearby hospital and was later referred to a general hospital before he died.

She also told the Police Counsel, Mr. Cyril Ejiofor that her husband never told her that he had any enemies in the office.

She also informed the panel that she received N10 million cheque from Lagos State governor, but however sought for justice to be done.

She expressed further that she had been to the mortuary but has not been able to see the husband’s corpse.

In her words: “They said they want to do an autopsy before they can release the corpse of my husband. I want the police to investigate what caused his death.”

At a point, the deceased’s widow argued that if it was not the police that shot her husband, they ought to have arrested at least one of the killers.

During the proceeding, a video clip of Inspector Erinfolami was played where he was shot in the stomach and wriggled in pain.

The video showed a woman, trying to assist the late officer at the scene. The widow said although the lady is not a police officer, she works with the police at the tracking office.

Further hearing in the matter has been adjourned till January 15, 2021, following police counsel’s request to call a witness.