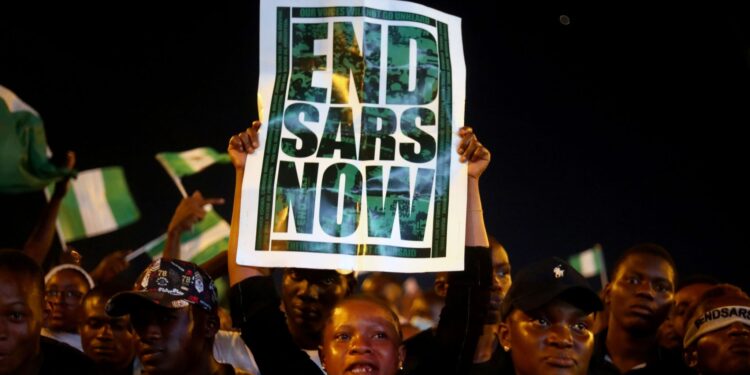 One of the #EndSARS protesters, Kamsiyochukwu Ibe, who testified before the Lagos State Judicial Panel of Inquiry on Restitution for Victims of SARS-Related Abuses and other Matters, has confirmed being attacked by hoodlums.

Ibe claimed that three hoodlums attacked her for testifying before the #EndSARS judicial panel in Lagos State.

Explaining how the attack happened in a video clip, the victim said she was waiting at a bus stop to board a vehicle home when the hoodlums used sharp objects to cut her in her hands and legs.

She added that the gang wanted to kill her for demanding justice at the panel.

“Last night, I was attacked on my way back by three guys whom I thought were passersby. I was standing at the bus stop waiting for a vehicle only for one of them to shine light on my face and said, ‘Is this not the girl from the panel?’ ‘You are the one claiming you sabi pass, you no wan stop.’

“He said if they killed me, they wanted to see how I would continue to agitate for justice. I said I didn’t know what they were talking about. They started hitting me all over my body, cutting my hands and legs like I was a thief. I survived by the grace of God because I thought I would die at that bus stop. This was what they did to me,” she said amid tears.

Reacting to the attack, one of the panel members, Ebun-Olu Adegboruwa (SAN), said since the submission of the report of the panel, there had been threats and attacks on witnesses and panel members by suspected agents of the government.

He added that Nigerians should hold the state government responsible should anything happen to him.

Adegboruwa said, “I have not committed any crime beyond joining other eminent Nigerians with unblemished integrity to accept the nomination of government on behalf of my constituency, the Nigerian Bar Association and the civil society, and indeed the masses of our people, for a national assignment.

“Two prominent lawyers of the government have openly incited opinions against me on national television, with mindless accusations. I have, however, refused to be intimidated or bend to the tactics of government to be silenced.

“Just last night, one of the prominent #EndSARS protesters who testified before the panel, Miss Kamsiyochukwu Ibe, was attacked and dealt serious machete blows, in what was clearly an attempted murder, as reported by her counsel, with very disturbing photos.

“I heeded the clarion call to serve by the government with the honest belief that the panel was meant to say the truth and nothing but the truth, which is what we have done. It is left for government and Nigerians to do the needful with the report of the panel.”

The state Commissioner of Information and Strategy, Gbenga Omotosho, had yet to respond to calls and a text message on the incident as of the time of filing this report.

The state Police Public Relations Officer, CSP Adekunle Adekunle Ajisebutu, did not take his call which rang out.