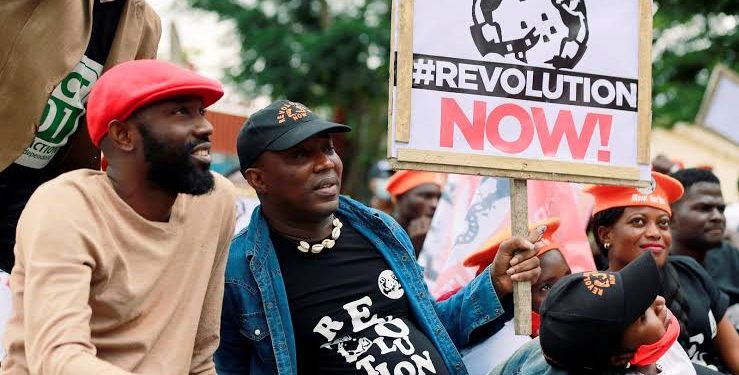 Prominent Human rights activist and publisher of SaharaReporters, Mr. Omoyele Sowore announced that he will be leading an #EndSARS memorial protests on October 20.

This is despite a warning by the Lagos and Osun State Police Commands against protests that might disrupt the peace currently being enjoyed in the states.

The #EndSARS protests which were held in October 2020 were against the activities of the now-disbanded Special Anti-Robbery Squad, a unit of the Nigeria Police Force which was accused of police brutality.

The epicentre of the protests was the Lekki tollgate in Lagos where many youths gathered day and night to air their grievances against police brutality and bad governance.

They were dispersed from the location by gun-wielding soldiers on October 20, 2020, an action which some quarters believe led to the loss of lives.

This was followed by the destruction of private and public properties by hoodlums in Lagos, an incident that informed the latest warning issued by the police in the state.

However, Sowore, in a post on his verified Twitter  handle, disregarded the warning issued by the police.

He said: “@PoliceNG in Lagos and across Nigeria, there will be #EndSARS memorial protests and direct actions on October 20, 2021.

“Nobody can suppress the will of Nigerians to repudiate the mass atrocities of the @mbuhari regime on that day and beyond.”

But faulting the planned protest, the Police, in a statement by the Command’s Spokesperson, Adekunle Ajisebutu, vowed to use all legitimate means within their constitutional powers against such.

The statement reads: “Credible intelligence at the disposal of the command has revealed clandestine plans by some youths, individuals or groups to embark on a protest today in commemoration of the first anniversary of #EndSARS.

“Given the volatility of the present situations in the country and the breakdown of law and order which the planned protest might cause, the Lagos State Police Command sternly warns against any form of protest today.

“The command wishes to use this medium to warn the youths, groups, or associations planning such protest to jettison the idea forthwith.

“The police in the state will not fold their arms and allow some misguided elements disrupt the peace and serenity currently being enjoyed in the state.

Similarly, the Osun Police Command, in a statement by its spokesperson, Yemisi Opalola, said the force will stop at nothing to ensure it averts the planned protest.

The statement reads: “The intelligence that availed the police command revealed underground/nocturnal plans by some youths/group of people to embark on protest in commemoration of the first anniversary of the #ENDSARS saga.

“Given this, the Commissioner of Police, CP Olawale Olokode, warned individuals or group of individuals that are planning such in the state and their sponsor(s) to stop the plan or any of such action(s) forthwith as the command will not allow a repeat of last year’s END SARS saga and it is fully prepared to use all legitimate means to avert such intending protest.

“Consequently, the State Police Command will not tolerate any unlawful protest/gathering or assembly that will jeopardize the peace of the state as the last year’s #ENDSARS saga protest’ still lingers in the minds of Nigerians especially the Police and other security agencies which caused pain, anguish, needless loss of lives and wanton destruction of public and private property.

“Therefore, the Commissioner of Police has given a marching order to the Area commanders, Divisional Police Officers and Tactical units to be at alert and nip in the bud any act capable of truncating the peace of the state.”