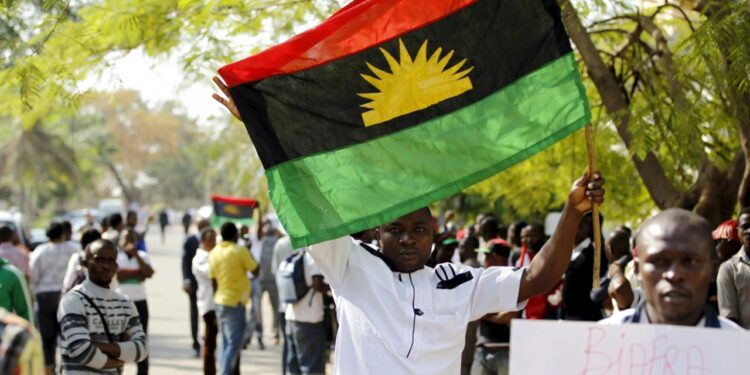 Two officials of the Department of State Security Service (DSS) alongside three members of the Indigenes People of Biafra (IPOB) have reportedly died, Sunday, in Emene area of Enugu State after the two groups clashed.

According to reports, some machete-wielding members of the group allegedly gathered at the St Patrick’s Community School compound along the old Abakaliki road at 9a.m. to conduct a combat training for new members.

It was also learnt that the DSS got information about the meeting, thus stormed the venue to halt it.

A heated argument was said to have ensued as a result of the confrontation, which lead to an aggressive brouhaha.

The IPOB members, it was learnt, overpowered the DSS operatives and made it to a nearby Emene Police station, chanting solidarity songs.

A source stated that although some of the officials of the DSS had guns they did not fire at the rampaging members of the group.

It added that in the ensuing confrontation, sounds of gunfire and teargas fumes filled the axis between St Patrick Secondary School and St Joseph Catholic Church, stressing that some residents who were already on their way to church for the morning service could not continue for fear of being hacked.

Occupants of the area, as seen in a video trending online, scampered to safety. The streets were vacated as security operatives continued in their raid in the area.

Several others also sustained varying degrees of injuries while the police, who arrived the scene, were said to have arrested about 15 members of the IPOB.

The police, according to reports, have restricted movement of persons and vehicles as they combed the area in search of IPOB members.