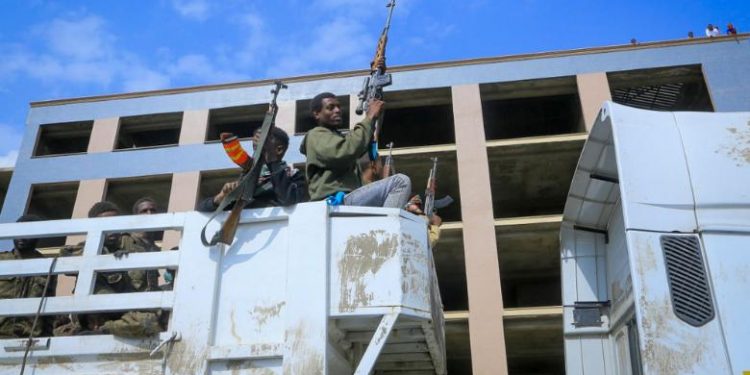 The move comes two days after Prime Minister Abiy Ahmed urged citizens to take up arms to defend themselves against the Tigray People’s Liberation Front (TPLF).

Earlier on Tuesday, authorities in the capital Addis Ababa told residents to prepare to defend their neighborhoods.

The state of emergency was imposed after the TPLF claimed to have taken the key cities of Dessie and Kombolcha, both of which are near a main route into the capital.

The TPLF said it was considering marching on Addis Ababa, about 235 miles (380km) south of its forward position.

The governments of four of the country’s 10 regions have called on Ethiopians to mobilize to fight against the Tigrayan forces, state-affiliated Fana TV said.

Ethiopia last imposed a state of emergency in February 2018, for six months, ahead of the transition of power to Abiy. Curfews were enforced and people’s movements restricted, while thousands of people were detained.

Prior to the announcement on Tuesday, people were moving around the capital as normal.

“I will try to buy food commodities in advance. But so far I haven’t yet purchased anything,” one woman, who asked not to be named, told Reuters.

The US Embassy in Addis Ababa is urging US citizens to leave the country and has restricted travel for all personnel from leaving the capital, according to a new security alert issued Tuesday.

TPLF claims territory
The TPLF dominated national politics for nearly three decades, but lost much of its influence when Abiy took office in 2018 following years of anti-government protests.

Relations with the TPLF soured after the group accused Abiy of centralizing power at the expense of Ethiopia’s regional states — an accusation Abiy denies.

TPLF spokesperson Getachew Reda said that if the Tigrayan forces and their allies succeeded in removing the government, they would establish an interim replacement.

There would also need to be a national dialogue, Getachew said, but Abiy and his ministers would not be asked to take part. “They will have their day in court,” he said.

The government meanwhile has said it wants to take the TPLF’s leaders to trial.

The TPLF has claimed the capture of Dessie, Kombolcha and Burka, all in the Amhara region, in recent days.

A government spokesperson disputed the capture of Dessie and Kombolcha but later released a statement saying TPLF “infiltrators” had killed 100 youths in Kombolcha.

Spokespeople for the government, military and the Amhara region did not return calls seeking further comment on Tuesday.
On Monday night, Tigrayan forces said they had linked up with fighters from an Oromo force also fighting the central government. The Oromo are Ethiopia’s biggest ethnic group. Many of their political leaders are currently in prison.
US alarmed

The conflict in what was once considered a stable Western ally in a volatile region has plunged around 400,000 people in Tigray into famine, left thousands of civilians dead and forced more than 2.5 million people in the north to flee their homes.

The US’s Special Envoy for the Horn of Africa said on Tuesday the US was alarmed by the deteriorating humanitarian situation in the north and urged all sides to find ways to de-escalate and let aid in.

Jeffrey Feltman said Washington was seeing signs of famine and near-famine and that it was mostly government restrictions that were preventing humanitarian help from getting to people.

Also on Tuesday, US President Joe Biden’s administration accused Ethiopia of “gross violations of internationally recognized human rights” and said it planned to remove the country from the African Growth and Opportunity Act (AGOA) trade agreement which gives it duty-free access to the United States.

When he first came to power, Abiy enacted significant political reforms, but rights groups say many of those freedoms have since been rolled back.

Abiy was awarded the Nobel Peace Prize in 2019 for ending a long-running border conflict with Eritrea. Troops from Eritrea, whose president is an arch-enemy of the TPLF, later entered Tigray to support Ethiopian forces.

The Eritreans pulled back from most of Tigray in June after many reports of major human rights violations. The Eritreans denied responsibility for any abuses.