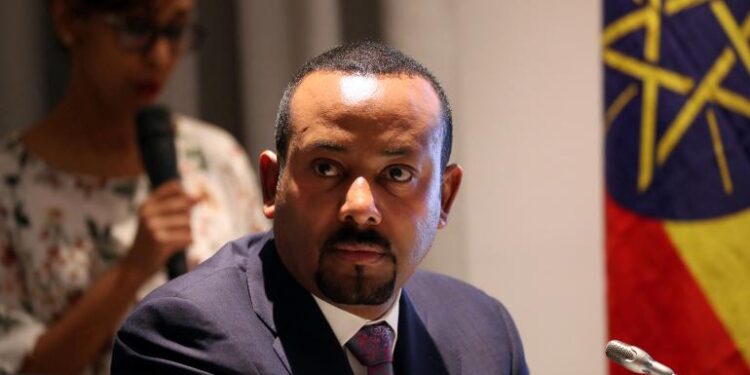 Ethiopian PM Abiy Ahmed says he is not ignoring international warnings over the escalating conflict in the Tigray region.

The Ethiopian military has seized the airport near the town of Humera amid a nearly week-old conflict in the northern Tigray region.

The state media announcement on Tuesday about the capture of the airport, 67km (42 miles) south of Humera, came as fighting continued with reports of Ethiopian government forces capturing territory.

“The Ethiopian National Defense Force has fully captured Humera Airport amid [a] continuation of [the] government’s military response against TPLF rebel group,” Fana TV reported, referring to the organisation that leads the government in the Tigray region.

Humera is located in the far northwest of the country near Ethiopia’s borders with Sudan and Eritrea.

A telephone and internet communications blackout in Tigray has made it difficult to verify the situation on the ground.

The African Union on Tuesday called for an immediate ceasefire.

“The chairperson [Moussa Faki Mahamat] appeals for the immediate cessation of hostilities and calls on parties to respect human rights and ensure the protection of civilians,” the AU bloc said in a statement, also urging talks.

The leader of Ethiopia’s Tigray region, meanwhile, accused Eritrea of sending soldiers over the border to attack local forces.

In a statement on local TV, Debretsion Gebremichael gave no evidence for what would be a major escalation.

“Since yesterday, the army of [Eritrean leader] Isaias [Afwerki] have crossed the country’s boundary and invaded,” he said. “They were attacking via Humera using heavy arms.”

Eritrea’s government the accusation. “This is an internal conflict, we are not part of the conflict,” Foreign Minister Osman Saleh Mohammed said.

‘No rebuffing of anyone’

Ethiopian Prime Minister Abiy Ahmed’s office said he is not ignoring international calls for calm over the escalating conflict that many fear is sliding towards civil war.

The violence in the northern area bordering Eritrea and Sudan threatens to destabilise Africa’s second-most populous country. Ethnic conflict in the region has simmered since Abiy took over in 2018.

“There is no rebuffing of anyone by the prime minister. He had acknowledged and given gratitude for the concerns shown,” Abiy’s spokeswoman Billene Seyoum said in response to a request for comment on a diplomat’s assertion that Abiy was “not listening to anyone”.

“Nevertheless, Ethiopia is a sovereign nation and its government will ultimately make decisions in the long-term interest of the country and its people.”

The United Nations also has pressed Abiy – a former soldier who once fought alongside Tigrayans against Eritrea – to start a dialogue.

Abiy, the continent’s youngest leader at 44, won a Nobel Peace Prize last year for democratic reforms and for making peace with Eritrea.

But last week, the prime minister, who is from Ethiopia’s largest ethnic group the Oromo, launched a campaign against forces loyal to ethnic Tigrayan leaders in the northern region. He accused them of attacking a military base.

Hundreds of people have been killed in the latest conflict, sources on the government’s side said on Monday. But Abiy said fears of chaos were unfounded.

Leaders of Ethiopia’s northern Tigray region said on Monday the federal government led by Abiy had launched more than 10 air raids against them in recent days.

Meanwhile, the newly appointed Ethiopian army chief, Berhanu Jula, said federal forces had captured four towns in western Tigray where much of the fighting has reportedly been concentrated.

Ethiopian TV broadcast images of what it said were Ethiopian government forces entering the border town of Dansha in Tigray. Footage showed residents celebrating and cheering the arrival of government soldiers.

The public broadcaster also showed images of what it alleged were Tigrayan militia who surrendered. Ethiopia’s air force is “pounding targets with precision”, a military official said Monday.

Neighbouring Sudan has reportedly sent more than 6,000 troops to the border.

Tigrayans account for just 6 percent of Ethiopians but had, before Abiy’s rule, dominated politics for nearly 30 years.

They are battle-hardened from the 1999-2000 war with neighbouring Eritrea and from the struggle to topple Mengistu Haile Mariam in 1991. They and allies number up to 250,000 fighters and possess significant stocks of military hardware, according to the International Crisis Group think-tank.

Tigrayans say Abiy’s government has unfairly targeted them as part of a crackdown on past rights abuses and corruption.

All-out war would damage Ethiopia’s economy after years of steady growth. Abiy has pledged sweeping reforms to open lucrative sectors such as telecommunications to foreign investment.