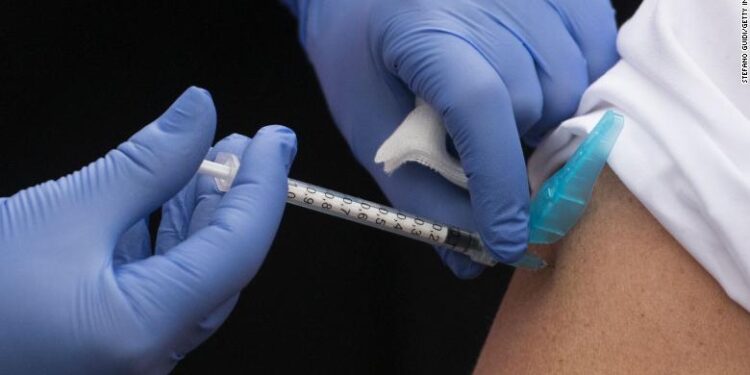 TURIN, ITALY - MARCH 23: during of the Italy Clamps Down On Public Events And Travel To Halt Spread Of Coronavirus on March 23, 2020 in Turin, Italy. (Photo by Stefano Guidi/Getty Images)

A pilot took to the skies above Germany using his flight path to draw a syringe, ahead of the launch of the Covid-19 vaccination campaign across Europe, according to data from FlightRadar24.

The air traffic tracking site reported that the flight took off from Friedrichshafen, near Lake Constance in southern Germany, on December 23, and lasted one hour and 44 minutes

The European Union (EU) officially kicked off its Covid-19 vaccination campaign on Sunday, days after approving the Pfizer/BioNTech coronavirus vaccine on December 21.

“The … vaccine has been delivered to all EU countries,” European Commission president Ursula von der Leyen said on Twitter on Saturday.The Commission has declared December 27, 28 and 29 “EU vaccination days,” which von der Leyen said were “a touching moment of unity.” She added that: “Vaccination is the lasting way out of the pandemic.

“The first people to receive doses of the vaccine were largely elderly or frontline medical workers.

In France a 78-year-old woman named Mauricette was the first to be given the vaccine, according to a tweet by Aurélien Rousseau, the director-general of the Ile-de-France region’s health agency. Mauricette, a former housekeeper, received the vaccine at a public hospital in the greater Paris area.

Italy — once the European epicenter of the coronavirus pandemic — also administered its first doses of the vaccine on Sunday.

Professor Maria Rosaria Capobianchi, a virologist at the Lazzaro Spallanzani National Institute for Infectious Diseases, was one of the first to be given it. Capobianchi is part of the team that first isolated the virus in Italy.

Also among the first group to be given the jab were a doctor and a nurse.Dr. Alessandra D’Abramo was working at the institute when Italy’s first two coronavirus patients — a Chinese couple — were hospitalized there on January 30.

“This is a great day because after a long time of great work in the ward, now is a day of hope and I’m so proud of this,” she told CNN shortly after she was given the injection.

“The vaccine is approved by the FDA, the EMA and AIFA — the Italian [regulator] — so I think it’s safe and effective,” she added.A 96-year-old nursing home resident was the first to be given the vaccine in Spain. Araceli Rosario Hidalgo, who was born in 1924, received her dose on Sunday at a care home in Guadalajara, near Madrid.

The second person in the country to receive a vaccine was a staff member at the same home, nursing assistant Mónica Tapias.

The Czech Republic took a different approach — its first dose of the vaccine was administered to the country’s Prime Minister Andrej Babiš, while the second dose was given to war veteran Emilia Řepíková.Babiš has come under fire in recent months, after coronavirus cases spiked in the country.

The PM was initially reluctant to impose stricter rules on the population, citing the need to protect the country’s economy, but the decision led to the virus spreading widely. Eventually restrictions were enforced and Babiš apologized.

While the EU officially launched its vaccination program on Sunday, some countries had made a start on vaccinating people a day earlier — doses were administered on Saturday in both Germany and Slovakia.

The vaccine rollout comes as European governments race to contain the spread of a new Covid-19 variant that was first detected in the UK.The European Medicines Agency (EMA) is continuing its rolling review of other promising vaccine candidates, including those from AstraZeneca and Oxford University, and from Johnson & Johnson.