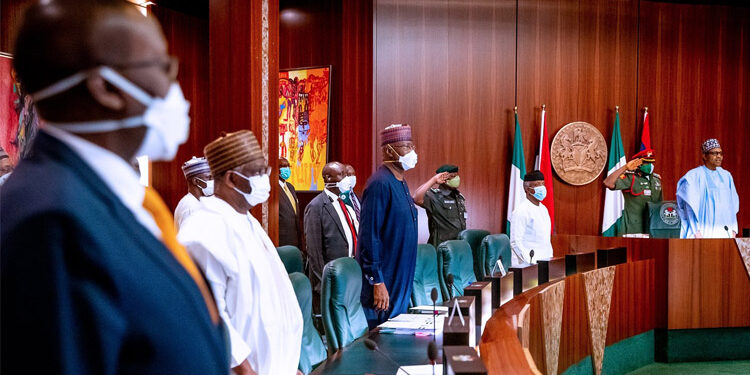 While briefing State House correspondents at the end of the Council meeting presided over by President Muhammadu Buhari at the Council Chamber, Presidential Villa, in Abuja, the Minister of Works and Housing, Babatunde Fashola said he presented a memorandum from the ministry for two contracts worth N50.858 billion which was approved.

According to him, a road project in Kano State, worth N12.157 billion and another one linking Kaduna and Plateau states, worth N38.701 billion, were approved by the council.

He said, “The Ministry of Works and Housing presented one memorandum for the award of contract for the construction of two roads; the Yakassai-Badume-Damargu-Makinzali Road in Kano, in favour of CCECC for N12.157 billion and the rehabilitation of the Kaduna-Panbegua-Jos Road, linking Kaduna and Plateau states, in favour of Setraco Nigeria Limited, for N38.701 billion and the proposals were approved by the Federal Executive Council.”

He said, “As part of opening up rural areas in the FCT, predominantly agricultural area, the Federal Executive Council has approved the revised estimated total cost/augmentation of the contract for the construction of Yaba-Kpahe Road, in Kwali, Abaji area council in the Federal Capital Territory.

“As you know, that is an area that is by River Gurara, which is a very important water body crossing the FCT. It is a very important agricultural area and this particular project, we hope when completed is going to enhanced the economic development of that area, food security in the FCT and bring about security and peace.

“Council also approved the revised estimated total cost/augmentation and change in scope of the contract for the construction of one service carriageway of inner northern expressway from Ring Road III to Rind Road IV – Abuja industrial Park. It is supposed to link the road to the rest of the road systems in the territory.

The Minister of Information and Culture, Alhaji Lai Mohammed, briefed on behalf of the Minister of Aviation, Senator Hadi Sirika, on the expansion work at the Maiduguri airport.

He said approval was granted for the contracts for the expansion of the Maiduguri Airport’s apron and another one for the insurance of 22 airport facilities across the country.

He said, “On behalf of the Minister of Aviation, who presented two memos, I want to give you highlight of the two memos. The first memo is a contract for the expansion of the apron at the Maiduguri Airport. This contract is worth N719,117,868.60. It’s awarded to a company called Luvaslink Projects Limited.

“The expansion of the Maiduguri Airport has become necessary because of the increased traffic at the airport. The apron of an airport is actually that area where aircrafts manoeuvres are made, where they turn, where they park.

“The second contract is one awarded to Zenith General Insurance Company and 19 other insurance companies to insure assets, such as terminal buildings in 22 airports belonging to the Federal Airports Authority of Nigeria (FAAN). The contract is in the sum of N390,550,687.45. Both memos were approved by Council today.”

Meanwhile, the FEC also granted ratification for the Nigerian Road Safety Strategy II (NRSS II), which is designed to reduce road accidents and make traveling safe across the country.

Disclosing this at the briefing after weekly meeting, the Minister of State for Budget and National Planning, Mr. Clement Agba, said the newly ratified NRSS II is an improvement on the NRSS I, which was operated between 2014 and 2018.

“I presented to the Federal Executive Council for ratification, the Nigerian Road Safety Strategy II, which is an update to the maiden of the Nigerian Road Safety Strategy I that was from 2014-2018. The NRSS II seeks to improve on the achieve the of the first edition by further reducing road accidents and fatalities and instituting basis for sustainable road traffic crashes abs fatalities reduction.

“In putting together the revised document, the NRSS I performance was assessed, benchmarking was done with other regions of Africa and the world in terms of road safety statistics abs road safety strategies before the documentation was put together and costed.

“There are four basic differences between NRSS I and NRSS II. One is the goal setting. For NRSS I, the reduction in road traffic crashes was to be by 35 percent by end of the year 2018, this has been pushed further and reduced to 50 percent by the year 2030.

“Apart from the strategic activities defined in the pillars in NRSS I, NRSS II now includes global framework plan of action. And then the documents that have been rephrased have now increased from four to about nine.

“The pillars upon which this strategy is based are road safety management, safer roads and mobility, safer road users which is very paramount, more important than the road conditions, safer vehicles and then the post-crash care.”