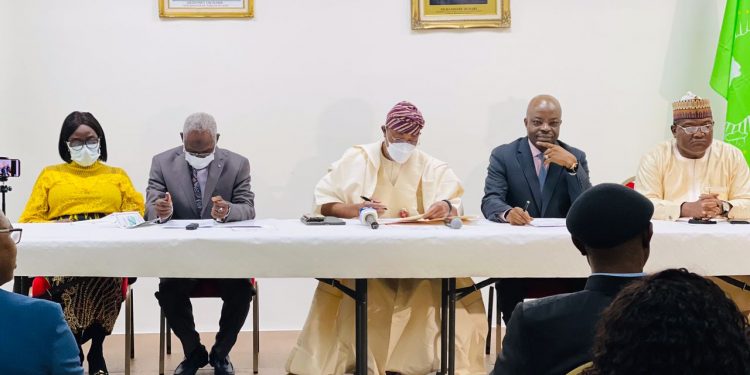 The Federal Government announced the launch of an enhanced e-passport, which they say will improve the passport application process for Nigerians at home and in the Diaspora.

The rollout of the e-passport was conducted at the Nigerian High Commission in London, United Kingdom.

In a statement on Tuesday, the Minister of Interior Affairs, Ogbeni Rauf Aregbesola, assured of the FG’s commitment with the enhanced e-passport, stating that the FG is committed to providing passports to all its citizens.

“What we have come to do here is symbolic of the core mandate of the Ministry of Interior Affairs and indeed, the Federal Government’s affirmation of citizenship integrity.

“The Nigerian passport is the highest affirmation of Nigerian citizenship. It is, therefore, our responsibility to provide the passport without any stress, within a reasonable period,” Aregbesola said.

He disclosed that the process of securing a passport had been riddled with challenges from the shortage of booklets to louting, with an economy of corruption built around it. He assured Nigerians that he comes from a tradition of problem-solving in public administration and does not believe that any problem is insurmountable.

“So we are going to solve all the problems associated with passport administration and we are already succeeding,” he said.

The Minister said that the enhanced e-Passport was a great improvement on the Biometric Passport technology which Nigeria adopted in 2007 stating that the FG is aware that technology rules the world and is keeping abreast with the latest development in the field.

“Over the years, the Nigeria Immigration Service (NIS) has worked assiduously and in close synergy with Messrs Iris Smart Technologies Ltd. to develop and implement passport reforms that are in tandem with international best practices.

He further explained that this year alone, the Ministry approved the deployment of over 600,000 booklets, the largest of its kind ever done, adding that the Nigeria Immigration Service through MIDAS is now connected to INTERPOL and can upload information to the agency on lost, stolen and invalidated passports in real-time.

“The Ministry of Interior Affairs has consistently provided the enabling environment for the NIS to undertake and implement several reforms,” the Minister said.

Acting Comptroller General of the NIS, DCG Isa said the agency is ready to serve the public and start rolling out the new enhanced e-passport in the United Kingdom with immediate effect.

“Our staff are professionals and will deliver excellent service to our citizens.

“Those who have any complaints whatsoever are advised to use the publicly listed complaints channels to adequately resolve any issues raised,” he stated.

Recall that this year that the FG launched the Electronic Temporary Passport to cater for Nigerians desirous of returning home but whose national passport is not available.