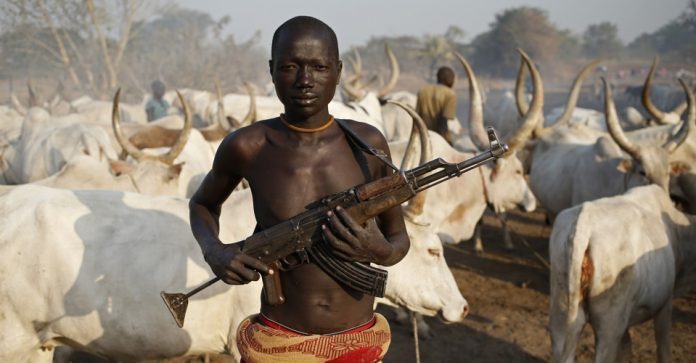 The Federal Government has sued for peace amid the ongoing crisis over the illegal quit-notice given to Fulani cattle herders in Ondo State.

The Presidency has covertly directed the leadership of Miyetti Allah to hold an urgent meeting with governors of the region.

A source close to one of the South-West governors said that the meeting would hold today, Monday, January 25, 2021 in Akure, the Ondo State capital, and was intended to appease leaders of the region.

The state’s Chairman of Miyetti Allah Cattle Breeders Association of Nigeria (MACBAN), Malam Garba Bello, has confirmed that the National Chairman of the association, Bello Abdullahi Bodejo, was already in the state for a meeting with the governors.

He said he could not speak on the seven-day ultimatum issued by the state government but urged the people to wait for the outcome with the governors today.

Meanwhile, the Aare Onakakanfo of Yoruba Land, Otunba Gani Adams, has described the Arewa Consultative Forum (ACF) and MACBAN as jokers over the ongoing security tensions in Oyo State.

Adams described as empty and insignificant the threats by the northern group and the herders’ association to attack the South-West region in a reprisal mission. He said such attempt would fail.

The Aare Onakakanfo, in a statement by his Special Assistant on Media, Kehinde Aderemi, said that threats of attack on the region by the northern group could fuel further crisis in Ibarapa, Oyo and Ondo and would certainly affect the entire nation.

He said: “The situation in Oyo and Ondo states truly justified the huge security challenges perpetrated by the herders, who had on several occasions kidnapped and killed many Yoruba in their various communities.

“The apex organisation in the North and the herders’ association should watch their statements or face the wrath of the Yoruba nation. By their inciting statements, the northerners are beating war drums. But we will resist any attempt by the North to turn our region to war zones and no amount of threat will stop us from securing our region from killer herdsmen.”

Doherty, in a statement, yesterday, said that calling for the arrest of Chief Sunday Adeniyi Adeyemo (a.k.a. Sunday Ighoho) would not solve the tension between Yoruba and Fulani in Oyo State.

Also, the Oodua People’s Congress (OPC) has warned the Presidency and the ACF against playing politics and ethnicity with the worrisome state of insecurity in the South-West.

It, however, pledged to assist Governor Rotimi Akeredolu in enforcing the deadline issued herdsmen to vacate forest reserves in Ondo State.

Otunba Wasiu Afolabi (alias “Askari”), Deputy President to the late OPC Founder, Dr. Frederick Fasehun, said this, at the weekend, in a statement after an emergency meeting of OPC leaders in Lagos.

The Congress described the manhunt launched by the police for the Yoruba activist, Chief Sunday Igboho, as misguided and provocative.