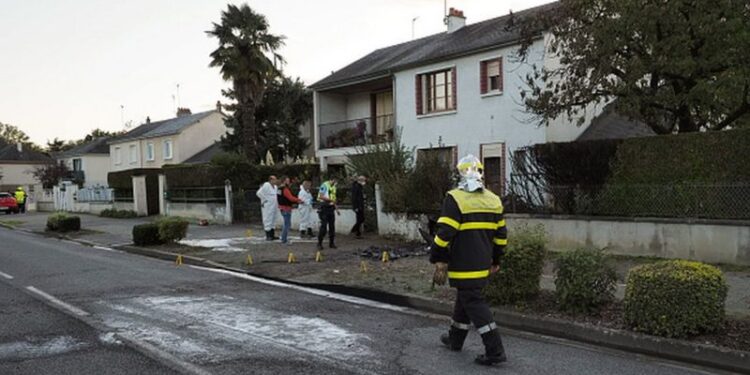 The cause of the mid-air collision over Loches, Indre-et-Loire is under investigation

The collision between two light aircraft happened south-east of the city of Tours at about 16:30 local time (15:30 BST) on Saturday.

Emergency crew, including about 50 firefighters, were called to the scene. They cordoned off the crash sites.

No-one else was harmed when the planes came down.

The smaller aircraft, a microlight carrying two people, landed on a fence around a house in the town of Loches, situated about 46km (29 miles) south-east of Tours.

A witness told AFP news agency it burst into flames after landing on the house’s electricity meter.

The larger plane, a Diamond DA40, landed more than a 100m (328ft) away in an uninhabited area. It had three tourists on board.

“Air emergency staff from Lyon were brought in at first to track down the plane, which was quickly found.”

There were no immediate details about the identities of the victims or the cause of the collision.

Local police have launched an investigation into the incident.

The crash sites have been blockaded and residents have been told to stay in their homes, a witness said.

Witness Genevieve Allouard-Liebert, who lives in the area, said she had heard a “big crash” when the planes came down. She said she and her husband saw a man fall from the larger plane as it skimmed nearby rooftops.

Mid-air collisions between small aircraft are considered to be rare. One fatal incident in France happened over Quiberon Bay off the coast of Brittany in 1998, when a Beechcraft 1900D collided in mid-air with a light aircraft, killing 15 people.