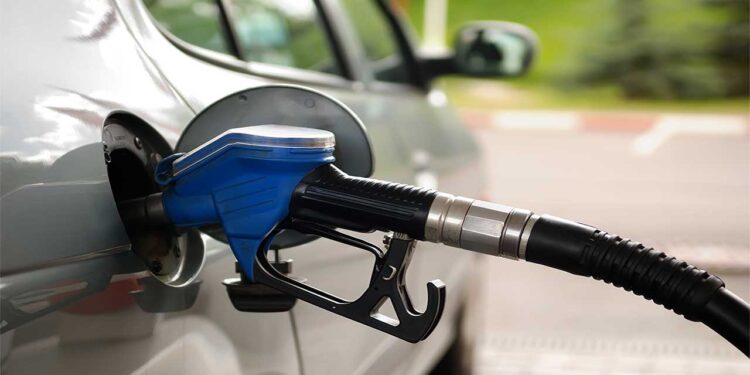 Petrol scarcity hit different parts of Nigeria on Tuesday, forcing motorists to spend hours at filling stations while battling to get the product.

Black marketers had a field day, selling a litre of fuel at N300-N400 in many parts of the country. Many motorists were forced to patronise them as the unpalatable alternative was to wait for hours in filling stations.

Amid long queues and waiting hours in Lagos, some filling stations sold a litre of the Premium Motor Spirit at N200/litre as against the approved price of N180-N185/litre.

One of our correspondents who visited some filling stations around Ikotun, Egbeda and Ojodu Berger areas on Monday and Tuesday witnessed long queues at the few stations that managed to sell.

A businessman, Kayode Oloriegbe, said he could not wait to buy from filling stations, but had to patronise a black marketer who sold at N300/litre.

“I was lucky to buy a 10-litre gallon at N3,500. Others said they bought at higher prices from the black marketers,” he said.

A tricyclist, Ade, who operates between Ago Palace Way and Second Rainbow Bus Stop at Amuwo-Odofin, said, “Black marketers sell five litres at N1,700 at Ago Palace during the day and N2500 at night. This is a normal thing. Whenever we are approaching the end of the year, we mostly witness fuel scarcity.”

One of our correspondents who went round the Isolo, Okota and Ilasa axis in Lagos witnessed that only one out of six petrol stations around that axis sold petrol to motorists and other consumers.  Others said they did not have petrol.

The attendants at the filling stations told The Punch that they had run out of fuel. They, however, said they were expecting to get the supply before the end of yesterday (Tuesday).

At Bova’s filling station, a long queue caused traffic gridlock along Ogba road as of the time of filing this report.

Similarly, a long queue was sighted at Rainoil filling at Berger Roundabout, with some drivers alleging that they were charged an extra N300 by fuel attendants. The attendants declined to speak with our correspondent.

At the Eterna Oil filling station located before Afeez Bus Stop, Ojodu Berger, there was also a long queue.

One of the fuel attendants said the trucks that were supposed to supply them with fuel did not turn up.

A similar long queue was seen at the Amuf Oil filling station at the Grammar School Bus Stop, Ojodu Berger.

An attendant at Oando filling station, Aguda, after Omole Bus Stop, who spoke with The Punch, told one of our correspondents that the flood that occurred a few days ago caused fuel prices to shoot up at depots, making it difficult for many stations to sell at regulated prices.

Checks by one of our correspondents revealed that many of the petrol stations along Alagbole/Akute/Denro/Ajuwon axis were shut due to the unavailability of petrol, while some of the filling stations witnessed small crowds of motorists jostling to manoeuvre through the queues.

It was also observed that while some of the filling stations sold at N180/litre, others sold as high as N185 as motorists flooded forecourts of gas stations in search of petrol.

A motorist, who identified himself as Alabi, said he had tried to get the product from more than three different stations on Tuesday before retiring out of frustration.

“When I came back from work yesterday, I tried at least three different filling stations, all to no avail. None of them sold. This one is out of the blue. The country is just becoming frustrating. Here, they sell at N180. By the time you come tomorrow, they might sell at N190.”

On the Iyana-Iba – Egbeda axis, only two filling stations (Oando and Total) were sold as at the time of this report while the gates of other stations, including the ones belonging to the Nigerian National Petroleum Company Limited (NNPCL), were under lock and key.

Other stations such as TotalEnergies, Ardova, 11 Plc and Fatgbems on the Berger expressway had long queues as of Tuesday morning.

Stations such as TotalEnergies and NNPCL sold at N180 per litre.

In Katsina State, operators of illegal fuel depots known as “Bubulutu” were the only ones that sold fuel to motorists and other users of the product.

The few filling stations that still sold the product, especially in the state capital, only sold for a few hours before announcing to motorists that the product was no longer available.

Although the majority of the black market operators sold at N2,000 per four-litre keg, they still recorded heavy patronage due to the non-availability of the product in many filling stations in the state.

Fuel scarcity was first observed at the beginning of October in the state and was attributed to the flooding witnessed along some of the routes which vehicles supplying fuel passed through.

The situation was still on as of Tuesday.

It was also observed that the few filling stations sold fuel to motorists N240 and N270 per litre.

Some motorists said the development had forced them to buy the products from neighbouring states where they alleged they found it easier to buy without much stress.

A lecturer at a University in Katsina said, “What I do these days before coming to Katsina is to fill up my car either in Kano or in Gusau and also buy an extra 25 litres to take care of my movements while here. I believe the fuel scarcity is more or less artificial, instead of all these flooding reasons being given as excuses.”

Transport costs have risen in response to the fuel scarcity.

Transport fare from Iyana-Isolo to Berger axis in Lagos that used to go for N500 increased to N800 on Tuesday.

Commercial vehicle drivers moving from Iyana Oworo to Berger raised their fares from N300 to N400 while those plying the Ketu to Arepo axis jerked up theirs from N400 to N500.

One of the drivers blamed the fuel scarcity, stating that some of they were being forced to patronise black marketers to avoid lining up behind long queues.

Oil marketers said there had been a low petrol supply by NNPC Limited.

Although spokesperson for the NNPC Limited, Garba Deen Mohammed, was not available to speak on the development, the National Operations Controller, the Independent Petroleum Marketers Association of Nigeria, Mike Osatuyi, told The PUNCH that there was no fuel in the country.

During a telephone conversation, Osatuyi said most of his members were unable to get products at depots.

“There’s no fuel. The NNPC is the monopolist supplier and my members have been unable to get products,” he said.

For some years now, the NNPC has been the sole importer of petroleum products into the country.

According to Osatuyi, those few members who were able to get products at the depots bought at between N175-N178 per litre.

When asked if the state oil firm had explained to marketers the reasons for the low supply, Osatuyi said his members were not interested “in stories.”

“What we want is products to sell, and we haven’t been getting it for some days now. Let NNPC give us fuel. Let them bring in vessels,” he said.

According to him, there had been an increase in depot price of fuel from N148.17 per litre to N178 per litre in the last one week.

He noted that none of the NNPCL depots had the product, prompting private depots to take advantage of the situation.

“The only option for our members is to opt for private depots to keep our business moving.

“We are totally against the increase because it will affect our profit margins and the masses. Some private depots that have the product deliberately refuse to sell for reasons best known to them,” he said, noting that the marketers should not be blamed for the increase in pump price.

“Selling at N170 per litre is not realistic,” insisting that IPMAN members had no other option than to sell between N195 and N200 per litre within Lagos, Ogun and Oyo states, and between N200 and N210 in Kwara, Ondo, Osun and Ekiti states.

He justified the hike in price on different charges, among which was the vessel charge paid in dollars.

“We are equally calling on the management of the NNPC and the Nigerian Midstream and Downstream Petroleum Regulatory Authority to investigate the arbitrary increase in fuel price by the private depot owners,” he added.

Meanwhile, the Nigerian Midstream and Downstream Petroleum Regulatory Authority appealed to Nigerians not to engage in panic buying of petrol, saying it had enough in stock.

The Chief Executive Officer, NMDPRA, Farouk Ahmed in Lagos on Tuesday, said he had checked with MOMAN and the NNPC Ltd. on the level of fuel stock and confirmed that they had sufficient stock.

“l spoke with the MOMAN’S Executive Secretary this morning and he told me they have sufficient stock. I have directed them to start evacuating the product immediately to filling stations.

“NNPC has also confirmed sufficiency and they have commenced evacuation. From now till tomorrow, the situation will be back to normal.

“I don’t know what is happening but we are on top of the situation,” he said.

Ahmed assured that there was enough fuel and appealed to members of the public to avoid panic buying as all efforts were being made to resolve shortages in some filling stations in Lagos and its environs.