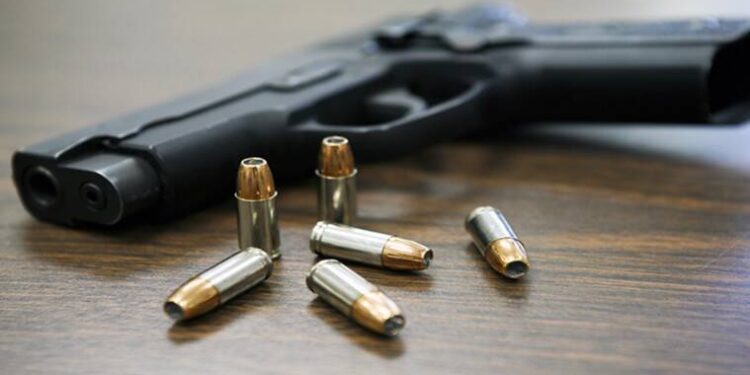 An accountant, Odiri Onosigho, has lost his life after being shot during a robbery operation at First Gate bus stop, Festac, in the Amuwo Odofin Local Government Area of Lagos State.

It was gathered that Odiri and his friend, Michelle, were at the bus stop around 6am waiting to board a bus to work when the robbers suddenly appeared and shot the 32-year-old in the chest while attempting to dispossess him of his phone.

During the attack, it was learnt that passers-by and commuters ran away, but when Michelle returned to search for Odiri, he found him lying on the ground in a pool of his own blood.

Odiri’s elder sister, Atarhe, said efforts to resuscitate him proved abortive as the hospitals that Michelle and some good Samaritans rushed him to for treatment rejected him because of the absence of a police report.

She explained that Odiri succumbed to the injuries he sustained during the attack, adding that his death was a big loss to the family.

The Delta State indigene stated, “I was preparing to go to work when I got a call from my sister, Sarah, who said Odiri was dead. I asked how and she said I should start coming to Festac, because that is where our father’s house is located.

“So, my husband and I drove down to the Festac Police Station, where I saw Odiri’s corpse. When I asked what happened, I was told that he was on his way to work and unfortunately, he was at the First Gate bus stop with his colleague, Michelle, when an armed robber shot him in the chest, while dispossessing him of his phone.

“Everyone ran to find cover and after everything had settled, Michelle looked for my brother and found him bleeding on the ground, but he was still alive.

“She started calling for help but nobody helped until she saw a group of Igbo guys speaking in her local dialect and as they saw her crying, they offered to help. They put my brother in a tricycle and rushed him to the Mother and Child Hospital, opposite First Gate.

Atarhe alleged that Odiri was rejected by the government hospital on the pretext that it was only attending to mothers-to-be, new mothers and their new born children, adding that he died after other private hospitals in Festac refused him treatment because of the failure to obtain a police report.

She said, “So, they left the government hospital and rushed him to a hospital, but they rejected him there too; they also took him to two other hospitals, but he was similarly rejected. All these hospitals were asking for a police report.

“At a point, Michelle was helpless and had to rush to my father’s house to inform our family members that Odiri had been shot. My dad and sisters all rushed down to the third hospital, where my father pleaded with the doctor on duty to check his son, but at that point, he had already died.

“He was shot close to his heart and the pellets had spread all over his body, because he was shot with a local gun. He was taken to the fourth hospital on 21 Road, for confirmation and we were told that he was already dead. That was on Thursday, April 15, 2021.

“It is too lackadaisical on the part of the hospitals; it was a bad one and I wasn’t impressed at all; they would have saved a life or given him a chance. The law requires that they should save life first and get the police report later.

“They would have given us hope instead of rejecting him till he died. His corpse was deposited in the Navy Hospital mortuary, but we have buried him. Everybody in the family is grieving.”

When contacted, the state Police Public Relations Officer, Muyiwa Adejobi, said he would find out and get back to our correspondent, but he had yet to do so as of the time of filing this report.