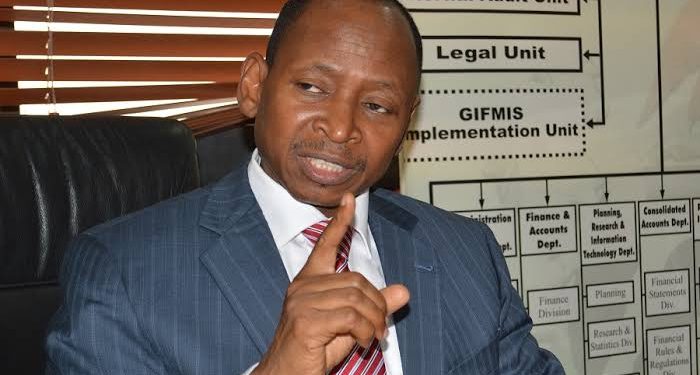 The Economic and Financial Crimes Commission, EFCC, on Thursday narrated before an Abuja High Court sitting at Maitama, how the suspended Accountant-General of the Federation, AGF, Ahmed Idris, and two others pilfered about N84.7billion of $2.2 billion meant for nine oil producing states.

The anti-graft agency told the court that the former AGF and his co-defendants— Godfrey Olusegun Akindele and Mohammed Kudu Usman — who are facing trial for allegedly diverting public funds to the tune of about N109.4 billion, perfected the fraud, using the account of a company, Gezawa Commodity Market and Exchange Limited, which is the 3rd defendant in the matter.

Testifying as the first prosecution witness, PW-1, an investigative officer at the EFCC, Mr Hayatudeen Ahmed, said whereas the 2nd defendant, Akindele, was a staff in the office of the AGF, the 3rd defendant, Usman, was the Director of federation account in the same office.

He said the ex-AGF was arrested following the outcome of an investigation into a petition lodged against him by the Federal Treasury Concerned Staff Association.

The witness said the investigation revealed that the defendants had after the Federal Account Allocation Committee, FAAC, approved $2.2 billion for the nine oil producing states, surreptitiously diverted N84.7 billion out of it under the guise that it was for the settlement of consultants.

He told the court that a company that was floated by the 2nd defendant, Akindele, who was a technical assistant to the former AGF, was approved as the sole consultant for the deal.

According to him, subsequently, the defendants, sequentially withdrew funds from the Escrow account of FAAC and shared among themselves and other persons that included a former governor of Zamfara State, Abdulaziz Yari and a former deputy governor of Abia State, Chuks Akomas.

He told the court that his team of investigators uncovered that the former AGF used his own share of the loot to purchase property like the Gezawa Commodity and Exchange Market Ltd, Gezawa Integrated Farms Ltd and Kano City Mall, some of which he said were acquired in the name of his family members.

Led in evidence by EFCC lawyer, Mr Rotimi Jacobs, SAN, the PW-1 said his team had in the course of the investigation, interrogated several persons, including a Kano-based Bureau de-Change, BDC, operator, Beta Kurah, who he said admitted that he received over N1.3 billion from the former AGF, all in cash and in US dollars.

He said the BDC operator equally revealed that he made several payments, including N208 million into the account of Gezawa Commodity and Exchange Market Ltd, in Jaiz Bank.

He said: “He further admitted that he paid the sum of N866 million and another amount of N507 million to one Mustapha Muktar of Marcs and Construction Ltd, for the construction of Gezawa Commodity and Exchange Market Ltd and Kano City Mall.

“Based on his statement, we invited Muktar, who stated that all the monies received from Beta, through his account, was on the instruction of the 1st defendant,”

Continuing, the witness, said: “My lord, we found out that there was an agitation by nine oil producing states on the depletion of the excess crude account without the payment of their 13 per cent derivation fund.

“These amount was to be deducted over a 16 months period, on quarterly basis. 11.5 per cent of this figure, which is equivalent to N84.7 billion, was put aside for the payment of some public officials to facilitate this payment.

“Even after the determination of this amount by the post-mortem sub-committee, the service of Olusegun Akindele and Co. Ltd, a company belonging to the 2nd defendant, was procured under the guise of consultancy.

“N84.7 billion, which is 11.5 per cent, was paid to Akindele Olusegun and Co through Firstbank Plc. The sum of N84.39 billion equivalent to 9.84 per cent less bank charges, was what was shared among the various parties.

“Investigation revealed that this account was under the control of the 1st defendant (Idris) and the 3rd defendant (Usman) who was the director of federation account in the office of the AGF.

How the money was shared

“Investigation further revealed that N18.8 billion was paid to a group known as Revenue Mobilization, Allocation and Fiscal Commission.

“This group was represented by one of the commissioners of the agency, in the person of Chris Akomas, a former deputy governor of Abia State. This amount was withdrawn and converted to US dollars by the 2nd defendant and handed over to Chris Akomas.

“The second group is the Accountant-General’s group which got a total of N18.01 billion, out of which the 2nd defendant, Mr. Akindele, gave the equivalent of N1.8 billion in US dollars to the 3rd defendant

“Also from the money, N1.07 billion was transferred from Olusegun Akindele and Co’s FirstBank account to the Zenith Bank account of UYK Nigerian Ltd, on the instruction of the 1st defendant.

“Investigation established that UYK Nigeria Ltd is a company owned by a certain Usman Kansila, a known associate of the 1st defendant. The balance of N15.1 billion was converted to US dollars and handed over to the 1st defendant by the 2nd defendant.

“Upon investigation into why these payments were made, it was revealed that the funds were used in the construction of Gezawa Commodity Market and Exchange Ltd, located in Gezawa city in Kano State.

“The third group, which was called group of Commissioners of Finance in the nine oil producing states, received 2.5 per cent equivalent of N21.4 billion.

“The amount was withdrawn by the 2nd defendant, Akindele, converted to US dollars and handed over to the same Chris Akomas on behalf of that group.

“The 4th group, called Yari group, received N17.15 billion. The entirety of the sum was transferred to the account of Finex Professional Services on the instruction of the representative of this group, Abdulaziz Yari, the former governor of Zamfara State.

“The remaining 1.054 per cent equivalent of N8.9 billion was retained by the 2nd defendant, Akindele.

“Furthermore, 0.5 per cent of the 1.054 per cent, equivalent of N4.29 billion was converted to US dollars by the 2nd defendant and handed over to the 1st defendant as appreciation for the consultancy service.

“The balance of N4.6bn, representing 0.54 per cent was what was finally the share of the 2nd defendant, Akindele.

“My lord, we invited all the defendants, they reported and volunteered their statements under word of caution.

“They admitted receiving these monies and investigation is still underway to recover funds paid to Chris Akomas, ex-governor Yari and co.”

Meanwhile, move by the prosecution counsel, Jacobs, SAN, to tender the confessional statements of the defendants in evidence, met stiff opposition by their respective lawyers who begged the court for time to consult their clients.

The defence lawyers, led by Chris Uche, SAN, lamented that they had not been able to get proper briefing from their clients who had been on remand at the Kuje prison.

Consequently, Justice Adeyemi Ajayi, adjourned the matter till August 10, even as she admitted both the petition against the ex-AGF as well as bank statements into evidence and marked them as exhibits.

Earlier in the proceedings, the court, granted the former AGF bail in the sum of N5 billion, with two sureties, which it stressed must be a Director and a Permanent Secretary.

The court equally granted the 2nd and 3rd defendants bail in the sum of N2 billion each with two sureties that must be Directors.

Justice Ajayi said she was inclined to adopt all the terms and conditions of the administrative bail the EFCC previously gave to the defendants.

As part of conditions, the defendants, were barred from travelling out of Abuja, even as they were ordered to surrender their international passports and undertake not to procure alternate passports during the pendency of the case.

The defendants were equally ordered to depose to an affidavit of assurance to abide by all their bail conditions.

Justice Ajayi held that they should remain in Kuje prison until all the bail conditions are perfected.

Why I Approved Redesign Of Naira Notes- Buhari