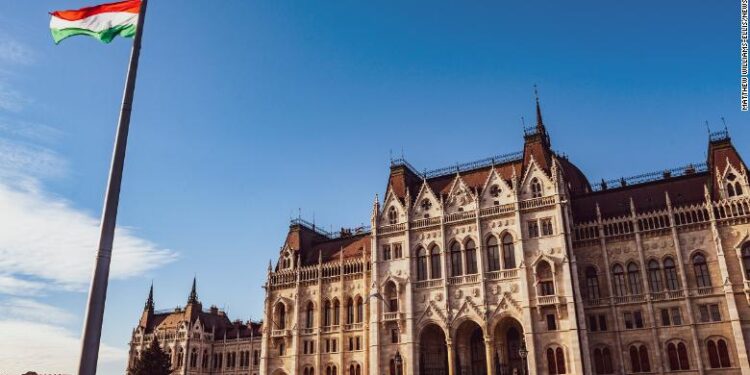 Hungary’s parliament has voted to redefine the concept of “family” in the country’s constitution, a move that will effectively bar same sex couples from adopting children. The move has been met with outcry from human rights groups and LGBTQ advocates.

The country’s politicians approved the bill on Tuesday. The new law defines marriage as between a man and a woman and asserts that the “foundation of the family is marriage and the parent-child relationship. The mother is a woman, the father is a man.”
As a rule, only a married couple in Hungary can adopt, with some exceptions made for single people, which would have previously been the pathway for a same sex couple.
Rights groups have decried the new law. “This is a dark day for Hungary’s LGBTQ community and a dark day for human rights,” said David Vig, director of Amnesty Hungary.

“These discriminatory, homophobic and transphobic new laws — rushed through under the cover of the coronavirus pandemic — are just the latest attack on LGBTQ people by Hungarian authorities,” Vig added.
Masen David, executive director of human rights organisation Transgender Europe, called on EU Commission President Ursula von der Leyen “to address the rights of LGBT parents, the attempt to erase gender diverse children, and the ban on legal gender recognition in the Commission’s rule of law assessment and on-going Article 7 TEU proceedings against Hungary.”
While Hungary is a member of the European Union, Prime Minister Victor Orban has been forging his own path in recent years, passing a rash of laws that EU leaders have warned will undermine the country’s democracy.
In May, Hungary made it illegal for transgender and intersex people to change their gender on identity documents. And though the country currently recognizes legal unions for same-sex couples, the ruling Fidesz party and its leader, Orban, oppose the legalization of same-sex marriage.
The Prime Minister’s office on Tuesday hailed the bill barring same-sex adoption, saying it was intended “to strengthen the protection of Hungarian families and the safety of our children.”
The stance of Hungary’s conservative lawmakers was also clearly reflected in the justification section of Tuesday’s bill, which states, “The Fundamental Law of Hungary is a living framework that expresses the will of the nation, the form in which we want to live. However, the ‘modern’ set of ideas that make all traditional values, including the two sexes, relative is a growing concern.”
Earlier this year, Hungary lost points in a ranking of European countries for LGBTI rights by the International Lesbian, Gay, Bisexual, Trans and Intersex Association (ILGA) because of “policies targeting LGBTI communities.”
The decision comes just months after a major EU survey found that six in ten LGBTI people in Europe avoid holding hands in public for fear of discrimination, and that 43% had been discriminated against in the past year.

FG repatriates 1,039 Nigerians from US, UK, others so far