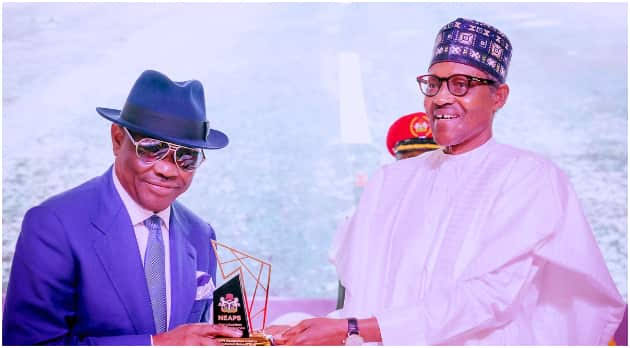 Rivers State Governor, Nyesom Wike, has said he will use the award bestowed on him by President Muhammadu Buhari, to campaign in the 2023 elections.

Wike said this during a dinner/reception in his honour to celebrate the ‘Distinguished Award in Infrastructure Delivery’ held in Port Harcourt on Monday night.

While dedicating the award to God, he said the successes his administration recorded in infrastructural development were made possible by the support and encouragement he received from the state.

“So I thank all of you, and I dedicate this award to God Almighty and to all of you who have prayed for us to achieve what we have achieved. The award is not to me. It is to all of you. I feel proud to say if the ruling party can say you have done well, who is that person? Let them come and campaign here.

“Bring your report card. I will bring the award and the certificate. President Buhari said I have done well.”

Wike said he never promised anyone the governor’s seat, pointing out that it is God that gives power.

He vowed to resign his position as governor if anyone could come forward to say he promised him the plum job and didn’t honour his words.

Wike said, “I told my people it is God that gives power. There is never any day I sat with anybody. I challenge whoever would say he sat with me, and I promised him he would be the governor.

“If anybody can come out and challenge me, I will resign as Governor of Rivers State.”

He added, “You want to become Governor? Is there anybody who dashed me governor? I worked, I fought for it. You, go and fight.”

The governor emphasised that people must learn to keep to agreements, adding that he was leaving office happy and fulfilled.

He said, “So people should try to keep agreements reached with people. Agreement is agreement. When I agree with you, I will keep to it. That is why they are having problems there. They can sleep.

“I am going, and I am also happily going. I don’t have any regrets. In fact, I told my wife that now I have no job, you will kiss me till you get tired.”

Lagos to Adopt Child Protection Policy at all Related Institutions