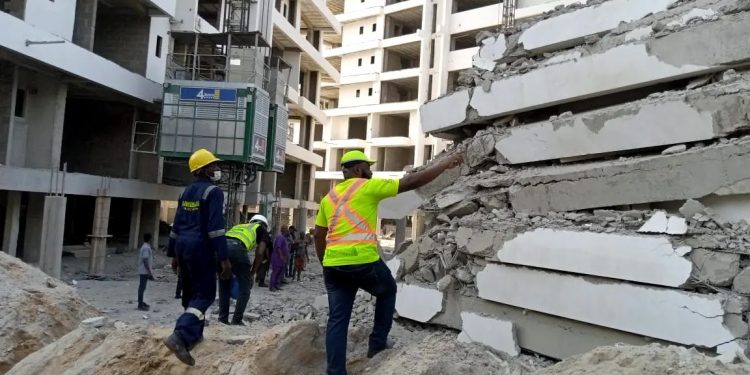 The death toll in the 21-storey building that collapsed on Monday on Gerrard Road, in the Ikoyi, Lagos, has increased to 40, as the owner of Fourscore Homes, the company in charge of the building, Femi Osibona, was recovered dead yesterday.

An official of the National Emergency Management Agency, NEMA, who confirmed the development at the site, said rescue workers recovered Osibona’s body yesterday evening. The body was said to have been taken to the morgue.

The development came on a day Governor Babajide Sanwo-Olu declared three days of mourning for victims of the collapsed building and inaugurated a six-man independent investigation team which was given 30 days to submit its report.

The 21-storey building crumbled around 2p.m. on Monday when workers were on the site.

The South-West Coordinator of the National Emergency Management Agency, Ibrahim Farinloye, also confirmed that 33 males and three females had been brought out dead from the rubble, bringing the total number of casualties to 38.

Farinloye added that nine people, including a female and eight males, were rescued alive.

However, there were conflicting reports on when the body was recovered.

Meanwhile, Governor Sanwo-Olu, yesterday, gave conditions under which the survivors of the 21-storey building would be discharged from the Lagos Island General Hospital, Marina.

Sanwo-Olu during his visit to the hospital, yesterday, stated that the survivors would only be discharged when the medical team give an all-clear concerning their condition.

On his Instagram page, the governor, who shared pictures of his visit to the hospital, said: “I visited the survivors of the collapsed building this morning (Thursday), and gave them my word that they will get the best of care in the hospital, and will not be discharged until they have been given the all-clear by the medical team attending to them.

“As much as we sympathize with all concerned, we will also ensure that we are open and thorough in investigating the cause of the collapse.

“In that regard, a high-powered professional investigative panel has been set up, whose membership consists of professionals outside of the government. The panel, which is headed by the President of Nigeria Institute of Town Planners, Toyin Ayinde, has been given clear terms of reference, with a 30-day assignment to tell us what went wrong at the site.

“The panel’s terms of reference also include ascertaining whether there was a compromise of the building codes by the developer, his contractor, and statutory regulatory agencies.”

Similarly, Governor Sanwo-Olu, in a statement by his Commissioner Information and Strategy, Mr. Gbenga Omotoso, declared three days of mourning over the building collapse.

The statement read: “All flags are to be flown at half-mast in public and private buildings and official engagements cancelled during the mourning period.

“Lagos State Government, once again, commiserates with all those who lost their loved ones in the unfortunate incident.

“Governor Sanwo-Olu has visited the site thrice to encourage the rescuers and console relations of those who are believed to have been trapped in the 21-storey building.

“He was today (yesterday) at the hospital to cheer up those injured before swearing in a six-man panel of Inquiry to find out why the building went down and recommend measures to prevent such incidents.”

The governor, who inaugurated a six-man independent investigation team set up to probe the remote and immediate cause of the collapse, said the panel had 30 days to submit its report in the first instance.

Members of the probe panel comprise professional builders, town planners, structural engineers and legal practitioners — all from the private sector.

President of Nigeria Institute of Town Planners, NITP, Mr. Toyin Ayinde, is the chairman of the panel, while Ekundayo Onajobi, a lawyer in a private law firm, is the secretary.

The panel’s terms of reference also include ascertaining whether there was a compromise of the building codes by the developer, his contractor and statutory regulatory agencies.

Inaugurating members of the panel, yesterday, Sanwo-Olu urged them to discharge their duties with the highest professionalism in the interest of the general populace.

The governor said: “Future generations would not forgive us if we do not do the right thing.

“Life is something that we need to continue to cherish. We can’t lose it in the shortest time even beyond our expectations.

“The constitution of this panel shows want to know what really happened so we can all learn and ensure we can live in a safe environment.”

The governor told the panel it had 30 days to turn around time to complete its investigation but could request more time if there was need.

He said: “No one can describe the pain families of the victims are going through. We believe Justice will be done and lessons learned will be used to guard our path forward. The whole nation is watching.”

In his remarks, chairman of the panel, Mr. Ayinde said: “We promise to be guided by professional standard and we hope we will collectively be able to chart a new course that will guarantee the safety of lives of Nigerian citizens as far  as the construction industry is concerned. This is exercise will be different if we decide to place value on lives.”