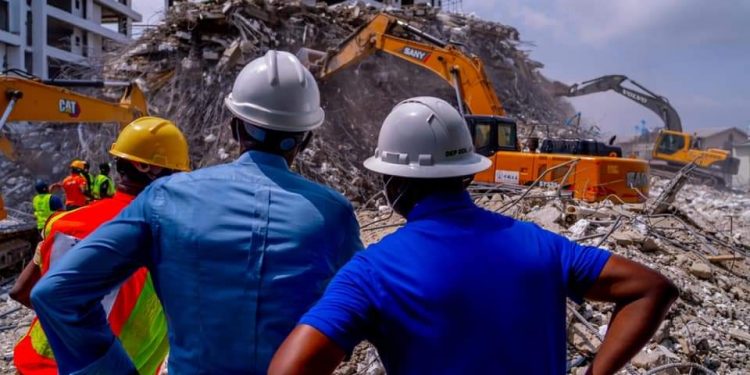 The Lagos state commissioner for information, Gbenga Omotoso, has given reasons the media were barred from the panel of inquiry set up to investigate the cause of the collapse of the 21-storey building in the Ikoyi area of the state.

The building, situated in the upscale neighbourhood of Ikoyi, was under construction when it crumbled on Monday burying at least 40 people. Many people trapped under the rubble have either been rescued or had their bodies recovered and deposited at the Yaba Mainland Hospital.

While giving updates to journalists at the site on Friday, Mr Omotosho said the panel has been made private to allow the members to concentrate fully on their assignments.

He described the panel of inquiry as a “very serious session”, adding that they can summon anybody for questioning.

“It is a very serious session that they are having. And you can see that where they are sitting is not a very big hall,” he said.

“There are so many things that they may want to take in camera, so that people would not come there and begin to disturb them, they need full concentration. And you know when media people are there, it is like a crowd… And they have just started the inquiry, so the panel has the duty to say how it wants to conduct its business,” the commissioner said.

“The government has given them the powers to do whatever they like, to summon anybody, if you want to go and say what you have seen, you are free to go there, it is not a secret place, no.”

The Lagos governor, Babajide Sanwo-Olu, on Thursday inaugurated the fact-finding panel at the headquarters of the Lagos State Waterways Authority (LASWA) at Falomo where members of the panel would be sitting.

The governor also signed an executive bill to give legal backing to the panel during their period of sitting. The panel will be chaired by Toyin Ayinde, the president of the National Institute of Town Planners.

Other members of the panel are Akintilo Idris; Yinka Ogundairo, an architect; Godfrey Godfrey, a builder; Bunmi Ibraheem, and Ekundayo Onajobi, the secretary of the panel.

Mr Sanwo-Olu urged the panel to be professional and factual in their findings, in order to give closure to the families of those who lost their lives in the incident.

On Monday, ‘help desks’ set up by the state government to take the details of those still missing families trapped in the debris were no longer present.

It was also observed that the debris had been evacuated almost to the ground level.