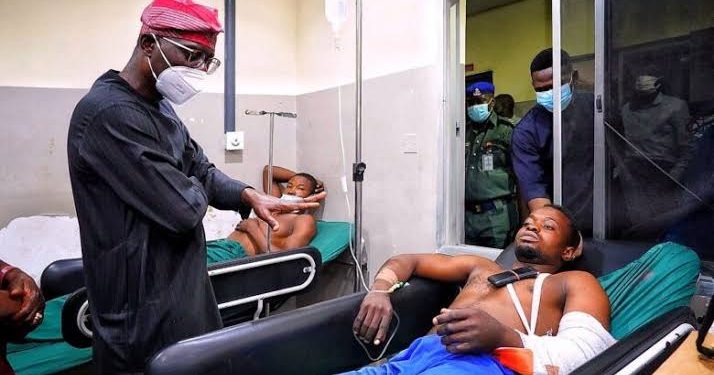 The Governor of Lagos State, Babajide Sanwo-Olu, has visited the survivors of the collapsed building in the Ikoyi area of the state.

It was gathered that the 21-storey building collapsed on Monday, trapping a yet-to-be-ascertained number of artisans and others.

So far, nine survivors have been rescued from the rubble of the building while the death toll as of the time of filing this report has risen to 38.

The Deputy Governor of Lagos State, Obafemi Hamzat, who visited the scene days ago said, “Out of the nine survivors, three have been discharged from the hospital while six are in stable condition and are doing well.”

The state had earlier promised to sort out the medical bills of the survivors rescued from the building.

The names of some of those rescued were given as Oduntan Timilehin, 26; Sunday Monday, 21; Adeniran Mayowa, 37; Sholagbade Nurudeen, 33; Waliu Lateef, 32; and Ahmed Kanleku, a 19-year-old Beninoise.

This is as the government restated its determination to ensure that as many people as possible are rescued alive from the rubble.