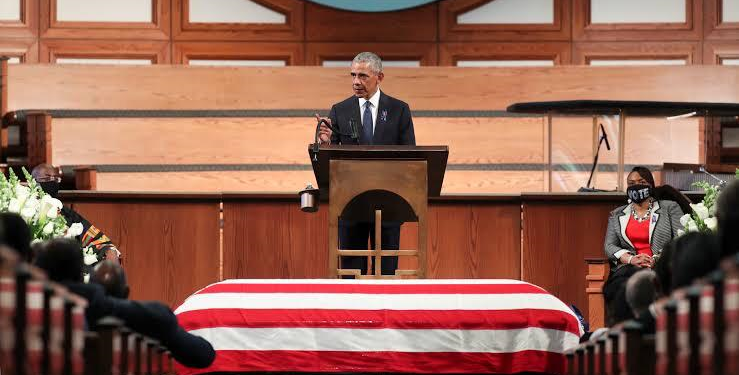 Former President Barack Obama eulogized civil rights icon John Lewis on Thursday before the late congressman’s body is laid to rest in Atlanta, drawing a comparison between the battles Lewis participated in during the Civil Rights Movement and the current protests for racial justice happening across America. “Today we witness with our own eyes police officers kneeling on the necks of Black Americans. George Wallace may be gone, but we can witness our federal government sending agents to use tear gas and batons against peaceful demonstrators,” Obama said. “I know this is a celebration of John’s life. There are some who might say we shouldn’t dwell on such things, but that’s why I’m talking about it.” “John Lewis devoted his time on this Earth (to) fighting the very attacks on democracy and what’s best in America that we’re seeing circulate right now.” Obama also urged Lewis’ followers to continue fighting and suggested he supported changing Senate rules in order to eliminate the legislative filibuster. “Once we pass the John Lewis Voting Rights Act, we should keep marching. To make it even better,” Obama said before listing several policy proposals to expand voting access. “And if all this takes eliminating the filibuster, another Jim Crow relic, in order to secure the god-given rights of every American, then that’s what we should do.”Speaking to mourners gathered at Ebenezer Baptist Church Horizon Sanctuary for Lewis’ funeral, the former President dubbed the late congressman a “founding father of a fuller, fairer, better America.” “America was built by John Lewises. He, as much as anyone in our history, brought this country a little bit closer to our highest ideals,” he said. “And some day, when we do finish that long journey towards freedom, when we do form a more perfect union, whether it’s years from now, or decades, or even if it takes another two centuries, John Lewis will be a founding father of that fuller, fairer, better America.” Former Presidents George W. Bush and Bill Clinton also spoke during the services, with Bush remembering Lewis as an “American saint” who championed love and hope during his lifetime.”From Freedom Summer to Selma, John Lewis always looked outward not inward. He always thought of others. He always thought of preaching the gospel in word and in deed, insisting that hate and fear had to be answered with love and hope,” the former President said.Following his remarks, Clinton remembered the late congressman as someone who constantly pushed for progress, despite facing opposition to his efforts. “John Lewis was a walking rebuke to people who thought, ‘well, we ain’t there yet and we have been working a long time. Isn’t it time to bag it?’ He kept moving. He hoped for and imagined and lived and worked and moved for his beloved community,” Clinton said. The service, which was called a “celebration of life” by the Lewis family, was a private event because of the coronavirus pandemic, and attendees were required to wear face masks. The event was also attended by a number of other notable guests, including Atlanta Mayor Keisha Lance Bottoms, and House Speaker Nancy Pelosi and Rev. Dr. Bernice King, both of whom delivered remarks during the service.Former President Jimmy Carter — the oldest of the four living former presidents — did not attend the memorial service.”The Carters are not traveling these days but are sending their condolences in writing,” Carter Center spokesperson Soyia Ellison told CNN in an email Wednesday night.In a statement read during the services by Rev. Dr. Raphael Warnock, Carter, 95, said that Lewis “has been a blessing to countless people and we are proud to be among those whose lives he had touched.” “While his achievements are enjoyed by all Americans, we Georgians know him as our neighbor, friend and representative. His enormous contributions will continue to be an inspiration for generations to come,” Carter said. Thursday’s events will cap a series of memorial ceremonies paying tribute to the late congressman, who served as the US representative for Georgia’s 5th Congressional District for more than three decades and was widely seen as a moral conscience of Congress because of his decades-long embodiment of the nonviolent fight for civil rights.Lewis died at the age of 80 following a six-month battle with cancer, a loss that sparked an outpouring of grief and tributes to his life and legacy across the country.

As part of a series of events honoring Lewis over the past week, his body lay in state at the US Capitol in Washington, a tribute reserved for the most distinguished government officials and military officers. Lewis was a towering figure of the civil rights movement. Angered by the unfairness of the Jim Crow South, he launched what he called “good trouble” with organized protests and sit-ins. In the early 1960s, he was a Freedom Rider, challenging segregation at interstate bus terminals across the South and in the nation’s capital.A number of lawmakers wore face masks with the message “good trouble” written on them during a ceremony at the US Capitol after Lewis’ casket arrived there earlier this week. At age 25, Lewis helped lead a march for voting rights on the Edmund Pettus Bridge in Selma, Alabama, where he and other marchers were met by heavily armed state and local police who attacked them with clubs, fracturing Lewis’ skull. Images from that “Bloody Sunday” shocked the nation and galvanized support for the Voting Rights Act of 1965, signed into law by President Lyndon B. Johnson.Following a short ceremony outside of Brown Chapel AME Church on Sunday, Lewis’ body traveled on a horse-drawn caisson along several blocks of downtown Selma to the Pettus Bridge, which his flag-draped casket crossed. 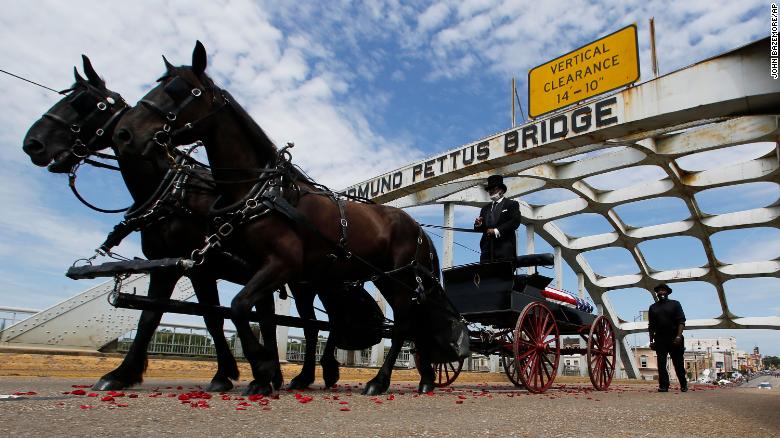 The casket of Rep. John Lewis moves over the Edmund Pettus Bridge by horse drawn carriage during a memorial service for Lewis on Sunday in Selma, Alabama.

The late congressman’s body was taken to the Georgia State Capitol in Atlanta on Wednesday, where Gov. Brian Kemp, Bottoms and their spouses could be seen on the Capitol steps waiting to receive the casket.President Donald Trump said on Monday that he would not pay his respects to Lewis as his body lay in state at the US Capitol.”No, I won’t be going, no,” Trump said when asked whether he would travel either Monday or Tuesday to honor the late congressman.The President also avoided a final opportunity to pay in-person tribute on Wednesday at Joint Base Andrews.Trump departed from the base for Texas around 9:55 a.m. ET, about 30 minutes behind schedule after speaking to reporters at the White House.

A procession with Lewis’ body and his family arrived at Andrews a few minutes later, met by an honor guard. The plane carrying Lewis’ casket, along with a separate aircraft for his family, departed following a brief ceremony.The two entourages did not overlap on the Andrews tarmac. After days of commemoration and remembrances for Lewis, Trump made no mention of him as he left Washington.The President did issue a cursory statement on Twitter following Lewis’ death and ordered flags lowered to half staff.”Saddened to hear the news of civil rights hero John Lewis passing. Melania and I send our prayers to he and his family,” he wrote on Twitter.