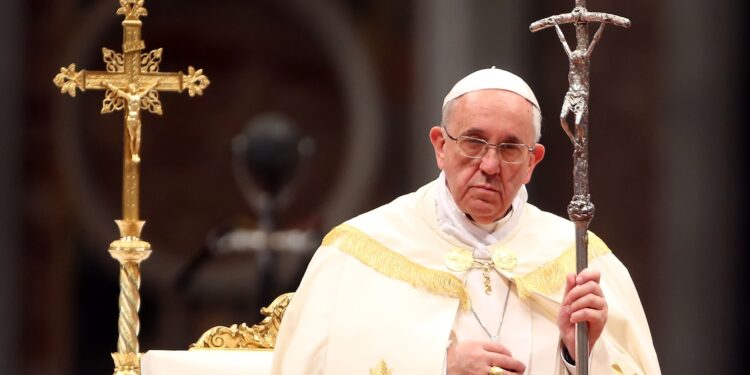 For the first time in his papacy, Pope Francis has called for the legalization of same-sex civil unions. This is a strong shift from the Catholic Church’s longstanding doctrine on LGBTQ rights.

However, the Pope is yet to express support for same-sex marriages.

The approval on same-sex civil unions came midway through a feature-length documentary, titled Francesco, which had its premiere at the Rome Film Festival earlier today.

The film delves into issues Francis cares about most, including environment, poverty, migration, racial and income inequality, and the people most affected by discrimination.

“Homosexual people have the right to be in a family. They are children of God. Nobody should be thrown out or be made miserable over it,” Francis said in one of his sit-down interviews for the film.

“What we have to have is a civil union law; that way they are legally covered.”

‘A century ago, anyone would have thought it absurd to talk about homosexual marriage,’ erstwhile Pope Benedict previously said in an interview with German journalist Peter Seewald.

Pope Benedict continued that equal marriage rights, alongside abortion and reproductive technologies were of the Antichrist.

He said: “Modern society is in the middle of formulating an anti-Christian creed, and if one opposes it, one is being punished by society with excommunication.

“The fear of this spiritual power of the Antichrist is then only more than natural, and it really needs the help of prayers on the part of an entire diocese and of the Universal Church in order to resist it.’

Erstwhile Pope John Paul II had condemned same-sex marriage during his tenure and branded it as an attack on the fabric of society before calling on Catholics to combat what he said was an aggressive attempt to legally undermine the family.

“Attacks on marriage and the family, from an ideological and legal aspect, are becoming stronger and more radical every day,’ he said in a statement in 2004.

“Who destroys this fundamental fabric causes a profound injury to society and provokes often irreparable damage.”

Francis himself had opposed legislation to approve same-sex marriages in Argentina when he was Archbishop of Buenos Aires a decade ago – but had supported some kind of legal protection for the rights of gay couples at the time.

But shortly after becoming Pope, he said of gay people that ‘we must be brothers’.

He added: ‘If a person is gay and seeks God and has goodwill, who am I to judge him?’

Papal biographer Austen Ivereigh told Reuters that the pope’s comments in the film were some of the clearest language the pontiff has used on the subject since his election in 2013.

The pope, who early in his papacy made the now-famous ‘Who am I to judge?’ remark about homosexuals trying to live a Christian life, spoke in a section of the film about Andrea Rubera, a gay man who with his partner adopted three children.

Rubera says in the film that he went to a morning Mass the pope said in his Vatican residence and gave him a letter explaining his situation.

He told the pope that he and his partner wanted to bring the children up as Catholics in the local parish but did not want to cause any trauma for the children. It was not clear in which country Rubera lives.

Rubera said the pope telephoned him several days later, telling him he thought the letter was ‘beautiful’ and urging the couple to introduce their children to the parish but to be ready for opposition.

“His message and his advice was really useful because we did exactly what he told us. It’s the third year that they (the children) are on a spiritual path in the parish,’ Rubera says in the film.

“He didn’t mention what was his opinion about my family so (I think) he is following the doctrine on this point but the attitude towards people has massively changed,’ he said.

Oscar-nominated director Evgeny Afineevsky was given remarkable access to cardinals, the Vatican television archives and the pope himself to create the piece.

He said he negotiated his way in through persistence, and deliveries of Argentine mate tea and Alfajores cookies that he got to the pope via some well-connected Argentines in Rome.