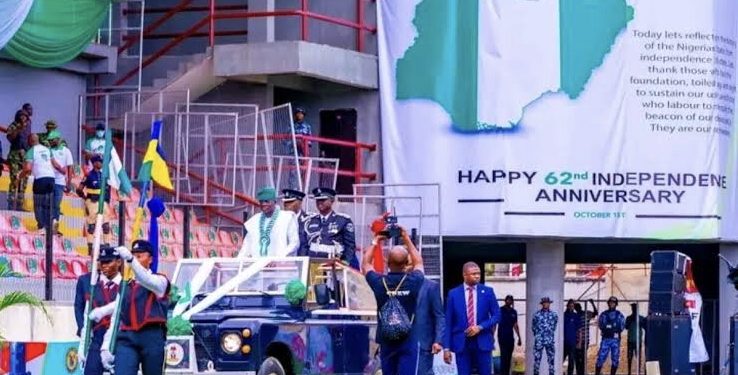 The ceremonial parade organised in Lagos State for the commemoration of the country’s 62nd Independence anniversary, on Saturday, rekindled patriotism.

Neatly dressed officers and flag-waving schoolchildren assembled in columns; they marched through the track of Mobolaji Johnson Arena, Onikan, in a procession to salute all classes of citizens who converged on the venue to celebrate the national day.

Governor Babajide Sanwo-Olu’s remark reassured residents of Lagos and brightened their hope for a better future.

The ceremony, organised by the Lagos State Government, was attended by all members of the State Executive Council, service personnel in the military and paramilitary formations in Lagos, members of diplomatic community, traditional rulers, and youth groups.

Sanwo-Olu said the occasion offered the citizens another opportunity to show deep reflection on Nigeria’s journey to nationhood, urging them to rededicate themselves to the task of nation-building.

The Governor acknowledged the nation had confronted several challenges, which slowed down its journey to fully attain dreams of its founding fathers, he believed records of steady progress in diverse areas were signs of hope for better future.

Sanwo-Olu reassured the citizens that Nigeria was on irreversible march to its greatness, stressing that the nation had been blessed with resourceful population, vibrant press, politically aware youths to make the country thrive economically, politically, socially and culturally.

He said: “Today marks the 62nd year when the shackles of colonialism were broken and cast aside in our country. Nigeria joined the league of independent countries, becoming the largest sovereign black nation on the earth. This year also marks the 23rd year since the birth of the Fourth Republic, which is our most successful democratic journey in history. We truly have a lot to be grateful for. Amidst many odds and challenges, we have continued to exist as one strong united country, recording progress on many fronts.

“We may not have been where we would like to be as a nation, there are clear signs of steady progress. I am personally persuaded and confident that Nigeria is on an irreversible march to its greatness, economically, politically, socially and culturally. We are blessed with an resourceful population, with entrepreneurial energy, a free and vibrant press, a youth population that is increasingly politically aware, a democracy that is not complacent, and a thriving appetite among all our people for good governance. By our collective efforts, we will rise above all odds and take our rightful place in history.”

Sanwo-Olu recalled that the nation’s independence effort started in Lagos, noting that the aspirations of the State embodied the hopes and dreams of black people. Lagos, the Governor said, remained the melting pot of cultures, faiths, tongues and socio-economic classes.

He said successive administrations in the State since 1999 had toiled in laying the foundation for the transformation of the State to a globally competitive mega city and bequeathed legacy of good governance.

Sanwo-Olu said he had built on the “strong” foundation laid by his predecessors and expanded the physical and economic growth of Lagos through his administration’s development blueprint, known as T.H.E.M.E.S. Agenda. He reiterated his commitment to build a State that would work and offer equal opportunity for citizens desirous of legitimate aspirations.

As 2023 general elections approach, the Governor cautioned against inflammatory campaigns intended to cause ethnic and religious discord. Sanwo-Olu called for tolerance of divergent opinions and respect for political views, as they formed the basis for democratic rules.

He said: “As the 2023 general elections approach, I enjoin everyone to focus on issues and refrain from the politics of division and bitterness. We must respect divergent opinions and respect the fact that the beauty of democracy lies in the fact that we will not all share the same ideological and political views. What we want, and what is not negotiable, is a better country.”

Other highlights of the ceremony included cultural display and cutting of Independence cake to mark the anniversary.